South Asia (or Southern Asia) is the south area of Asia. There are 13 countries of this region. Around it is (from west to east) West Asia, Central Asia, Eastern Asia, and Southeastern Asia. 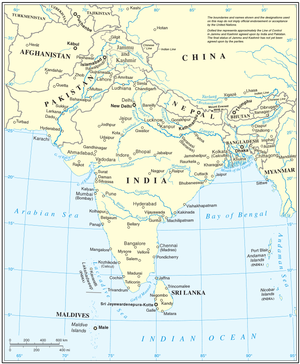 UN definition of Pakistan and India

The natural resource most used by the people is the rich land. Most of the people living there are farmers.[4] They make lots of cashews, millets, peanuts, sesame seeds, and tea. Lots of natural gas are there, but these resources are usually underdeveloped. Many people there raise cattle and sheep. The cattle are raised for their milk or to carry things in Hindu areas.

The climate of South Asia can be divided into three basic kinds: tropical, dry, and temperate.[4] The northeast is from tropical to subtropical (temperate). Moving west the moisture and elevation change, causing a steppe and a desert climate that is like the Middle East. There is also a part of steppe climate in the center of the lower peninsula. Two parts of the South Asia climate especially affect the people. One is the monsoons.[4] These changing winds bring lots of the area's rain, so when they do not come early, the land becomes very dry. Hurricanes also happen every year and sometimes destroy many things. In the extreme north of India and Pakistan, the climate is affected by the mountains.[4]