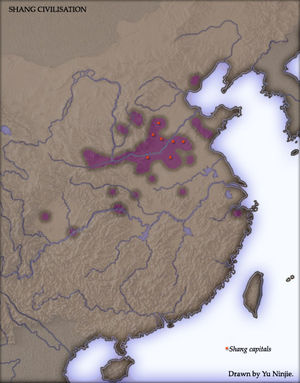 This was the Shang kingdom.

The Shang Dynasty (existed from 1600BC - 1046BC) was the second dynasty in China following the Xia dynasty. Most of what we know about the Shang Dynasty is from reading pictures on oracle bones and bronze objects. A dynasty is a series of rulers which are considered to be part of the same family because they are ruling a country(s) over generations. According to tradition the last shang king was overthrown in 1046 BC,and the succeeding dynasty was named after him.

This is an oracle bone. As you can see, it is not actually a bone, it is a rock with important Chinese language carved on it.