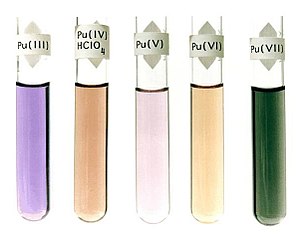 Some elements like plutonium have multiple oxidation states. We tell them apart by writing the oxidation number with a roman numeral.

The oxidation state (or oxidation number) of an element is used to predict what sort of chemical compounds form.

For example, if you put hydrogen and oxygen together, they form H2O, and not H3O because the oxidation number of oxygen is −2, which means that we need two +1 hydrogens for the numbers to balance.

You can look up the oxidation state(s) of an element on many periodic tables. They are usually between −2 and +3.

Oxidation states were invented by Antoine Lavoisier to predict how oxygen reacted in chemical reactions; hence the name. Later on, we learned that Lavoisier's theory can be used to predict other reactions too, many of them have nothing to do with oxygen.

In ionic compounds, oxidation states tell us about the movement of charge within the compound. For example, chlorine has a very high electronegativity which means that it really likes electrons and sodium has a very low electronegativity which means that it really hates electrons. When sodium and chlorine are close together, sodium will give away an electron to chlorine. A change in charge has taken place; chlorine's charge has gone down which we call reduction, and sodium's charge has gone up which we call oxidation.