Cobalt (chemical symbol Co) is a chemical element. It has an atomic number of 27 and an atomic mass of about 59. It is a metal. 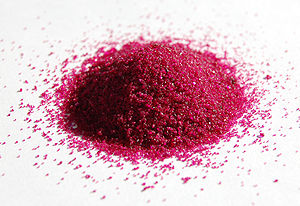 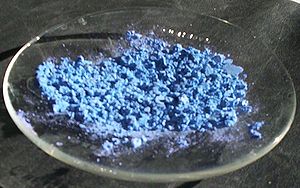 Cobalt is a transition metal. It is shiny and conducts electricity. It is magnetic. It is a hard metal. It is moderately reactive. Iron is more reactive and copper is less reactive. It dissolves slowly in acids. This reaction makes hydrogen and a salt of cobalt. Cobalt is normally in its +2 oxidation state as an ion. Some chemical compounds contain cobalt ions in its +4 oxidation state. Cobalt(II) chloride is one of the most common cobalt compounds. Many cobalt compounds are blue or pink. One of them is black.

Cobalt comes in two oxidation states, +2 and +3. Most soluble cobalt compounds are red. They can also be green, blue, brown, and black.

Cobalt is too reactive to occur as a pure element in the earth. It is found in certain minerals. It is found with copper and nickel deposits. Normally the three metals are bonded to arsenic and sulfur. The majority of cobalt mining is in central Africa. 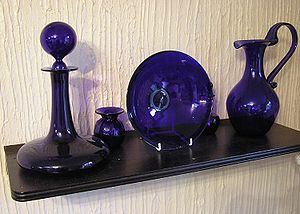 Glass colored with cobalt. Cobalt is most commonly associated with the color blue and gray. Blue is shown here.

The human body needs small amounts of cobalt for certain vitamins. Cobalt compounds are used to stop cyanide from poisoning the body.

People need cobalt compounds in small amounts, but cobalt is toxic in large quantities. Sometimes cobalt compounds were added to beer, and people that drank it were poisoned. It can cause skin irritation when touched.