The body is a thing that can be hurt or killed. Its functions are stopped by death.

Study of the human body 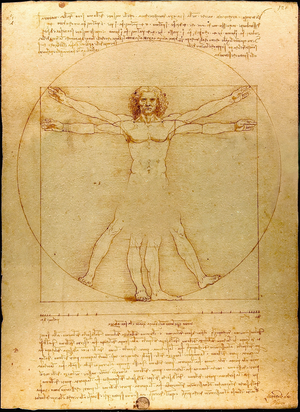 Many different fields of study look at the human:

The human body and other animals

Scientists think that the human body is very much like other animals. They see that some human behaviors are like animal behaviors. (Behaviors are the way an organism acts.) They know that 98% of the DNA in humans is the same as other primates.

The animal that is alive now that is closest to humans is the chimpanzee. 98.4% of the DNA is the same between humans and chimpanzees. However, this applies only to single nucleotide polymorphisms, that is, changes in single base pairs only. The full picture is rather different.

The draft sequence of the common chimpanzee genome was published in 2005. It showed that the regions which are similar enough to be aligned with one another account for 2400 million of the human genome’s 3164.7 million bases,[1] that is, 75.8% of the genome.

This 75.8% of the human genome is 1.23% different from the chimpanzee genome in single-nucleotide polymorphisms[1] (SNPs - changes of single DNA “letters” in the genome). Another type of difference, called 'indels' (insertions/deletions) account for another ~3% difference between the alignable sequences.[1] In addition, variation in copy number of large segments (> 20 kb) of similar DNA sequence provides a further 2.7% difference between the two species.[2] Hence the total similarity of the genomes could be as low as about 70%.