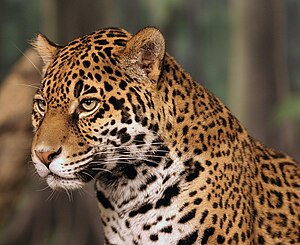 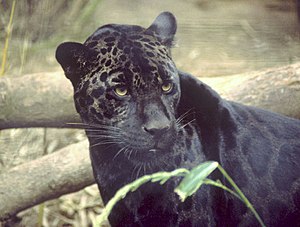 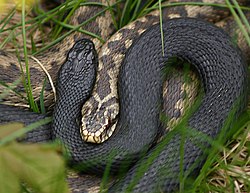 Polymorphism [1] in biology is when two or more clearly different phenotypes exist in the same population of a species.[2] The words forms or morphs are sometimes used.[3]

Polymorphism is common in nature. The most common example is sexual dimorphism, which occurs in many organisms. Another example is sickle-cell anaemia.

In order to be classified as such, morphs must occupy the same habitat at the same time and belong to a population with random mating.[4]

The polyphenic system does have a degree of environmental flexibility not present in the genetic polymorphism. However, such environmental triggers are the less common of the two methods.

The definition has three parts: a) sympatry: one interbreeding population; b) discrete forms; and c) not maintained just by mutation.

Genetic polymorphism is actively and steadily maintained in populations by natural selection. This contrasts with transient polymorphisms where a form is progressively replaced by another.[6]:6-7

By definition, genetic polymorphism relates to a balance or equilibrium between morphs. The mechanisms that conserve it are types of balancing selection.

Such a balance is seen more simply in sickle-cell anaemia, which is found mostly in tropical populations in Africa and India.

The sickle-cell variant survives in the population because the heterozygote is resistant to malaria and the malarial parasite kills a huge number of people each year.

This is heterozygote advantage, a kind of balance between fierce selection against homozygous sickle-cell sufferers, and selection against the standard HgbA homozygotes by malaria. The heterozygote has a permanent advantage (a higher fitness) so long as malaria exists; and it has existed as a human parasite for a long time. Because the heterozygote survives, so does the HgbS allele survive at a rate much higher than the mutation rate.[9][10]

Mammals normally produce lactase only as long as the mother has milk. Then the enzyme lactase is cut off. Modern humans are different.

The human ability to drink milk during adult life is supported by a lactase mutation. Human populations have a high proportion of this mutation wherever milk is important to the diet. The spread of milk tolerance is promoted by natural selection: it helps people survive where milk is available.

Ants exhibit a range of polymorphisms. First, there is their characteristic haplodiploid sex determination system, whereby all males are haploid, and all females are diploid.

Second, there is differentiation based mostly on feeding of larvae. This determines, for example, whether the adult is capable of reproduction.

Lastly, there is differentiation of size and 'duties' (particularly of females), which are usually controlled by feeding and/or age, but which may sometimes be genetically controlled. Thus the order exhibits both genetic polymorphism and extensive polyphenism.[16][17] 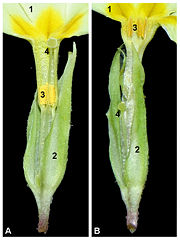 Dissection of thrum and pin flowers of Primula vulgaris

An example of a botanical genetic polymorphism is heterostyly, in which flowers occur in different forms with different arrangements of the pistils and the stamens.

So when an insect in search of nectar inserts its proboscis into a long-style flower, the pollen from the stamens stick to the proboscis in exactly the part that will later touch the stigma of the short-styled flower, and vice versa.[18][19]

Another most important property of the heterostyly system is physiological. If thrum pollen is placed on a thrum stigma, or pin pollen on a pin stigma, the reproductive cells are incompatible and relatively little seed is set. Effectively, this ensures outcrossing, as described by Darwin. Quite a lot is now known about the underlying genetics; the system is controlled by a set of closely linked genes;[20] these act as a single unit, a so-called super-gene.[2]ch10[7]p86[21]

All sections of the genus Primula have heterostyle species, altogether 354 species out of 419.[22] Since heterostyly is characteristic of nearly all races or species, the system is at least as old as the genus.[23]

Between 1861 and 1863, Darwin found the same kind of structure in other groups, such as flax (Linum) and in Purple Loosestrife and other species of Lythrum.[24]

Studies over many years have shown that natural populations of Drosophila are polymorphic for chromosome inversions.[27] The inversions are so common that they must be kept in the population by natural selection.[28][29]