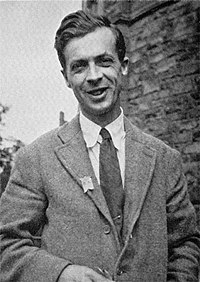 Sir Julian Sorell Huxley FRS (22 June 1887 – 14 February 1975) was an English evolutionary biologist, humanist and internationalist. He was born in London, and died there. He was a proponent of natural selection, and a leading figure in the modern evolutionary synthesis.

He was Secretary of the Zoological Society of London (1935–1942), the first Director of UNESCO, and a founding member of the World Wildlife Fund.

Huxley came from the distinguished Huxley family. His brother was the writer Aldous Huxley, and his half-brother, a fellow biologist and Nobel laureate, Andrew Huxley; and his paternal grandfather was Thomas Henry Huxley, a friend and supporter of Charles Darwin and proponent of evolution.

Huxley was well known for his presentation of science in books and articles, and on radio and television. He was awarded UNESCO's Kalinga Prize for the popularisation of science in 1953, the Darwin Medal of the Royal Society in 1956, and the Darwin-Wallace medal of the Linnean Society in 1958. He was also knighted in that same year, 1958, a hundred years after Charles Darwin and Alfred Russel Wallace announced the theory of evolution by natural selection. In 1959 he received a Special Award of the Lasker Foundation in the category Planned Parenthood – World Population. Huxley was a prominent member of the British Eugenics Society.

His particular interest was bird behaviour, especially the courtship of water birds. His observations on the ethology of the Great Crested Grebe, published in 1914, was a landmark in avian field research. His invention of vivid labels for the rituals (such as 'penguin dance', 'plesiosaurus race' etc.) made the ideas memorable and interesting to the general reader.[1]

Huxley was the most important biologist after August Weismann to insist on natural selection as the primary agent in evolution. A fine communicator, he was a prominent populariser of biological science to the public. In the early 20th century he was one of the minority of biologists[2] who believed that natural selection was the main driving force of evolution, and that evolution occurred by small steps and not by jumps. These opinions are now standard.[3] Though his time as an academic was quite brief, he taught and encouraged a number of evolutionary biologists at the University of Oxford in the 1920s.

Huxley was a key figure in the modern evolutionary synthesis. This explained how the discoveries of Gregor Mendel on genetics fitted with Charles Darwin's theory of evolution by means of natural selection. Huxley's [4]

Huxley's first 'trial run' was the treatment of evolution in the Science of Life (1929–30), and in 1936 he published a long and significant paper for the British Association.[5] In 1938 came three lengthy reviews on major evolutionary topics.[6][7][8]

Now it was time for Huxley to tackle the subject of evolution at full length, in what became the defining work of his life. His book Evolution: the modern synthesis was written whilst he was Secretary to the Zoological Society, and made use of his remarkable collection of reprints covering the first part of the century. It was published in 1942. Reviews of the book in learned journals were little short of ecstatic; the American Naturalist called it "The outstanding evolutionary treatise of the decade, perhaps of the century. The approach is thoroughly scientific; the command of basic information amazing".[9][10]

Huxley's main co-respondents in the modern evolutionary synthesis are usually listed as Ernst Mayr, Theodosius Dobzhansky, George Gaylord Simpson, Bernhard Rensch, Ledyard Stebbins and the population geneticists J.B.S. Haldane, Ronald Fisher and Sewall Wright.
However, at the time of Huxley's book, several of these had yet to make their distinctive contribution. E.B. Ford and his co-workers in ecological genetics were at least as important.

He always believed that on a broad view evolution led to advances in organisation. "Progress without a goal" was one of his favourite phrases.

In the final chapter of his Evolution the modern synthesis he defines evolutionary progress as "a raising of the upper level of biological efficiency, this being defined as increased control over and independence of the environment.[11] "Natural selection plus time produces biological improvement... Improvements in biological machinery... the limbs and teeth of grazing horses... the increase in brain-power... The eyes of a dragon-fly, which can see all round [it] in every direction, are an improvement over the mere microscopic eye-spots of early forms of life". "[Over] the whole range of evolutionary time we see general advance — improvement in all the main properties of life, including its general organization. [But] improvement is not universal. Lower forms manage to survive alongside higher".[12]

Huxley was a prominent member of the British Eugenics Society,[13] and was Vice-President (1937–1944) and President (1959–1962). Huxley was one of many intellectuals at the time who believed that the lowest class in society was genetically inferior. He advocated "the virtual elimination of the few lowest and most degenerate types".[14] In his writing he used this argument several times: no-one doubts the wisdom of managing the germ-plasm of agricultural stocks, so why not apply the same concept to human stocks?.[15]

In the post-war years, after the realisation that eugenic ideas had become tainted by the Nazis, Huxley (1957) coined the term "transhumanism" to describe the view that man should better himself through science and technology, possibly including eugenics, but also, importantly, the improvement of the social environment.

In response to the rise of European fascism in the 1930s Huxley was asked to write We Europeans with three other scientists. Huxley suggested the word 'race' be replaced with ethnic group. After the Second World War he was instrumental in producing the UNESCO statement The Race Question, which asserted that:

"A race, from the biological standpoint, may therefore be defined as one of the group of populations constituting the species Homo sapiens"... "Now what has the scientist to say about the groups of mankind which may be recognized at the present time? Human races can be and have been differently classified by different anthropologists, but at the present time most anthropologists agree on classifying the greater part of present-day mankind into three major divisions, as follows: The Mongoloid Division; The Negroid Division; The Caucasoid Division."... "Catholics, Protestants, Moslems and Jews are not races..." [16]

This is a selection of Huxley's most influential books: