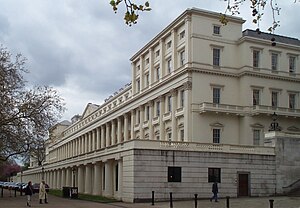 The motto of the Royal Society is Nullius in Verba (Latin: nothing in words).[3][4][5] This shows the Society's commitment to establishing scientific truth through experiment rather than by quoting authority.

The members of the society are called Fellows of the Royal Society, and put the letters FRS after their names. There are usually about 1600 of them. They are elected by existing Fellows. All other posts, such as the Secretary and President, are also by election.