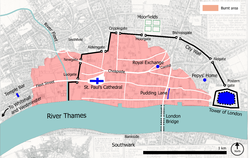 Map of London after the Great Fire in 1666, showing Pepys's home 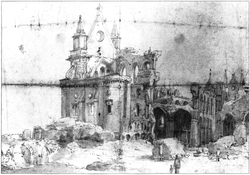 The ruins of the old St Paul's Cathedral

Samuel Pepys, (23 February 1633 – 26 May 1703) was an English administrator at the Admiralty and Member of Parliament. He is famous for his diary.

Pepys rose to be the Chief Secretary to the Admiralty under Charles II, and later under James II. Although Pepys had no maritime experience, he rose by patronage, hard work and his talent for administration.

The detailed private diary that he kept from 1660–1669 was first published in the nineteenth century. It is one of the most important primary sources for the English Restoration period. It provides a combination of personal notes and eyewitness accounts of great events, such as the Great Plague of London, the Second Dutch War and the Great Fire of London.

Pepys was a key person in the fire of 1666. Seeing that the wind was driving the fire westward, he ordered the boat to go to Whitehall, and became the first person to inform the King of the fire. The King told him to go to the Lord Mayor, and tell him to start pulling houses down.

Pepys took a coach back to Old St Paul's Cathedral, before setting off on foot through the burning city. He found the Lord Mayor, who said: "Lord! what can I do? I am spent: people will not obey me. I have been pulling down houses; but the fire overtakes us faster than we can do it."

At noon Pepys went home and 'had an extraordinary good dinner, and as merry, as at this time we could be'. In the evening he and his wife watched the fire from the safety of Bankside: Pepys writes that 'it made me weep to see it'. Returning home, Pepys met his clerk, Tom Hayter, who had lost everything. Hearing news that the fire was advancing, Pepys started to pack up his possessions by moonlight.

A cart arrived at 4am on 3 September, and Pepys spent much of the day arranging the removal of his possessions. Many of his valuables, including his diary, were sent to friend.[1] The next day, Pepys continued to arrange the removal of his possessions. By this point, he believed that Seething Lane was in grave danger, and suggested calling men from Deptford to help pull down houses and defend the king's property.[1] He described the chaos in the city, and his curious attempt at saving his own goods:

Sir W. Pen and I to Tower-streete, and there met the fire burning three or four doors beyond Mr. Howell's, whose goods, poor man, his trayes, and dishes, shovells, &c., were flung all along Tower-street in the kennels, and people working therewith from one end to the other; the fire coming on in that narrow streete, on both sides, with infinite fury. Sir W. Batten not knowing how to remove his wine, did dig a pit in the garden, and laid it in there; and I took the opportunity of laying all the papers of my office that I could not otherwise dispose of. And in the evening Sir W. Pen and I did dig another, and put our wine in it; and I my Parmazan cheese, as well as my wine and some other things.[2]
—

On Wednesday, 5 September, Pepys – who had taken to sleeping on his office floor – was woken by his wife at 2am. She told him that the fire had almost reached All Hallows-by-the-Tower, and that it was at the foot of Seething Lane. He decided to send her and his gold – about £2350 – to Woolwich. In the following days Pepys witnessed looting, disorder and disruption. On 7 September he went to Paul's Wharf and saw the ruins of St Paul's Cathedral, of his old school and of his father's house.[1] Despite all this destruction, Pepys's house, office and diary had been saved.

The complete and definitive edition of Pepys's diary by Robert Latham and William Matthews was published by Bell & Hyman, London, in 1970–1983.

Some of the older editions of the diary are available online.

As well as other sites about Pepys.