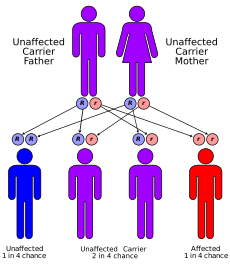 The pattern of inheritance of recessive genes is quite simple. If they are heterozygous with a dominant allele, the appearance (phenotype) is the same as a dominant homozygote. Only if both alleles are recessive does the recessive allele show in the phenotype b.

For example: Mirabilis jalapa. The heterozygote of this plant produces flowers in the F1 generation of the colour pink in contrast to the red (dominant) and white (recessive) homozygotes.