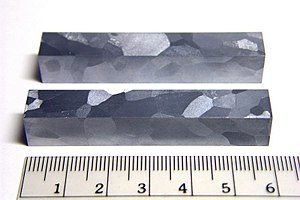 Vanadium is chemical element 23 on the periodic table. Its symbol is V. It is named after Vanadis, another name of Freyja.

Vanadium is a metal and is part of the group known as the transition metals. It is mostly used in steel where it helps strengthen the steel metal.

Vanadium is often found in aquatic forms of life. The human body may need a little bit of vanadium, but scientists are not really sure.

Vanadium can react with a variety of other elements, and the chemical compounds it forms often have beautiful colors.

The amount of vanadium in the universe is 0.0001%, making the element nearly as common as copper or zinc.[1] Vanadium is detected by spectroscopy in light from the Sun, and sometimes in light from other stars.[2]

Vanadium is the 22nd most common element in the Earth's crust.[1] Metallic vanadium is rare in nature.[3][4] However, vanadium compounds occur naturally in about 65 different minerals. Much of the world's vanadium production comes from vanadium-bearing magnetite found in ultramafic gabbro rocks. Vanadium is mined mostly in South Africa, north-western China, and eastern Russia. In 2013 these three countries mined more than 97% of the 79,000 tonnes of produced vanadium.[5]

Vanadium is also in bauxite and in deposits of crude oil, coal, oil shale and tar sands.