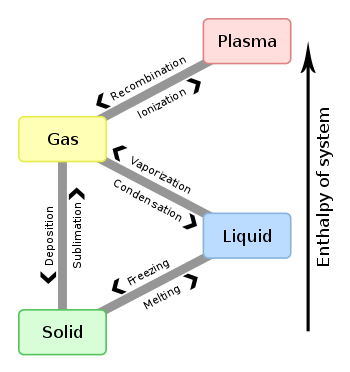 There are four common states of matter (or phases) in the universe: solid, liquid, gas, and plasma.

The state of matter affects a substance's properties. Examples of those properties include density, viscosity (how well it flows), malleability (how easy it is to bend), and conductivity. Changes between states of matter are often reversible.

In a solid, the positions of atoms are fixed relative to each other over a long time. That is due to the cohesion or "friction" between molecules. This cohesion is provided by metallic, covalent or ionic bonds. Only solids can be pushed on by a force without changing shape, which means that they can be resistant to deformation. Solids also tend to be strong enough to hold their own shape in a container. Solids are generally denser than liquids. Solid becoming a gas is called sublimation.

In a liquid, molecules are attracted to each other strongly enough to keep them in contact, but not strongly enough to hold a particular structure. The molecules can continually move with respect to each other. This means that liquids can flow smoothly, but not as smoothly as gases. Liquids will tend to take the shape of a container that they are in. Liquids are generally less dense than solids, but denser than gases.

In a gas, the chemical bonds are not strong enough to hold atoms or molecules together, and from this a gas is a collection of independent, unbonded molecules which interact mainly by collision. Gases tend to take the shape of their container, and are less dense than both solids and liquids. Gases have weaker forces of attraction than solids and liquids. Gas becoming a solid directly is called deposition.

Gases can sometimes turn directly into solids without passing through a fluid stage. That is called desublimation. You see it in the hoary frost which forms on window-panes in cold climates. It is the reverse of sublimation.

Phases of matter can be changed by a number of things. The most common ones are temperature and pressure. Substances usually become a gas at warm temperatures and/or low pressures, become a solid at cool temperatures, and become a plasma at extremely hot temperatures. Substances often become liquid in between solid and gas, but when the pressure is very low (such as the vacuum of outer space) many substances skip the liquid phase, going directly from solid to gas or vice versa. Scientists have created graphs called phase change diagrams to show the relationship between pressure, temperature, and phase of many substances.

The freezing point and the melting point are said to be the same, because any increase in temperature from that point will cause the substance to melt, while any drop in temperature will cause it to freeze. Likewise, the vaporization and condensation points (or the sublimation and desublimation points) always match. In most substances, as the pressure increases, the vaporization/condensation point also increases, or vice versa. For example, the boiling point of water decreases as you go up a mountain, because the air pressure is lower. The relationship for freezing and melting can go in different directions depending on the substance.

Many other states of matter can exist under special conditions, including strange matter, supersolids, and possibly string-net liquids. Scientist work on experiments at very high or very low temperatures to learn more about phases of matter.

When the core of a star runs out of light elements (like hydrogen or helium) to sustain fusion, the core will collapse into a very dense state called degenerate matter. Everything is packed very tightly and can barely move. If the star isn't too heavy, it becomes a white dwarf. In a heavier star, the pressure is so intense that even the protons and electrons are crushed, and it becomes a neutron star.

The protons and neutrons that make up atoms are made of even smaller things called quarks (which are "glued" together by things called "gluons"). At incredibly high temperatures over 2 trillion Kelvin, quarks and gluons turn into another state of matter. Humans can make a little bit of quark-gluon plasma in the Large Hadron Collider at CERN, but it doesn't last long before cooling down.

When a substance has enough temperature and pressure at the same time, called the critical point, you can't tell the difference between very dense gas and very energetic liquid. This is a supercritical fluid, and it behaves like both liquid and gas.

Superfluids, on the other hand, only happen at very low temperatures, and only for a few special substances like liquid helium. Superfluids can do things that regular liquids cannot, like flowing up the side of a bowl and getting out.