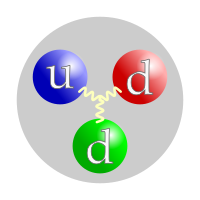 Neutrons were predicted by Ernest Rutherford,[5] and discovered by James Chadwick,[6][7] in 1932.[6] Atoms were fired at a thin pane of beryllium. Particles emerged which had no charge, and he called these 'neutrons'. They were later added to the modern image of the atom.

Like all hadrons, neutrons are made of quarks. A neutron is made of two down quarks and one up quark.[2][3] One up quark has a charge of +2/3, and the two down quarks each have a charge of -1/3. The fact that these charges cancel out is why neutrons have a neutral (0) charge. Quarks are held together by gluons.

Neutrons can be found in almost all atoms together with protons and electrons. Hydrogen-1 is the only exception. Atoms with the same number of protons but a different number of neutrons are called isotopes of the same element.

Neutrons are the key to nuclear chain reactions, nuclear power and nuclear weapons.