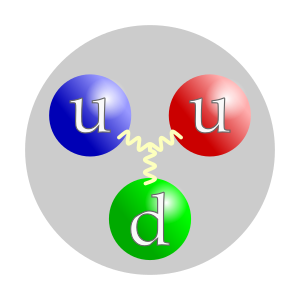 Up quarks are subatomic particles that help make up many larger particles, like protons. Up quarks have a charge of +2/3, and are the lightest of the six types (flavours) of quarks. Like all fermions (non force-carrying particles), up quarks have a spin of 1/2. They are affected by all four of the fundamental forces, which are gravity, the strong force, the weak force, and electromagnetism. Like all quarks, Up quarks are elementary particles, which means that they are so small that scientists believe that they can not be divided any more.