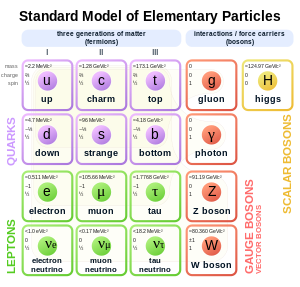 In physics, an elementary particle or fundamental particle is a particle that is not made of other particles.

An elementary particle can be one of two groups: a fermion or a boson. Fermions are the building blocks of matter and have mass, while bosons behave as force carriers for fermion interactions and some of them have no mass.[1] The Standard Model is the most accepted way to explain how particles behave, and the forces that affect them. According to this model, the elementary particles are further grouped into quarks, leptons, and gauge bosons, with the Higgs boson having a special status as a non-gauge boson.

Of the particles that make up an atom, only the electron is an elementary particle. Protons and neutrons are each made of 3 quarks, which makes them composite particles, particles that are made of other particles. The quarks are bound together by the gluons. The nucleus has boson pion fields responsible for the strong nuclear force binding protons and neutrons against the electrostatic repulsion between protons. Such virtual pions are composed of quark antiquark pairs again held together by gluons.

Mass and charge are properties we see in everyday life, because gravity and electricity affect things that humans see and touch. But spin affects only the world of subatomic particles, so it cannot be directly observed.

Fermions (named after the scientist Enrico Fermi) have a spin number of ½, and are either quarks or leptons. There are 12 different types of fermions (not including antimatter). Each type is called a "flavor". The flavors are:

Six of the 12 fermions are thought to last forever: up and down quarks, the electron, and the three kinds of neutrinos (which constantly switch flavor). The other fermions decay. That is, they break down into other particles a fraction of a second after they are created. Fermi-Dirac statistics is a theory that describes how collections of fermions behave.

Bosons, named after the Indian physicist Satyendra Nath Bose, have spin 1. Although most bosons are made of more than one particle, there are two kinds of elementary bosons:

The photon and the gluons have no charge, and are the only elementary particles that have a mass of 0 for certain. The photon is the only boson that does not decay. Bose-Einstein statistics is a theory that describes how collections of bosons behave. Unlike fermions, it is possible to have more than one boson in the same space at the same time.

The Standard Model includes all of the elementary particles described above. All these particles have been observed in the laboratory.

The Standard Model does not talk about gravity. If gravity works like the three other fundamental forces, then gravity is carried by the hypothetical boson called the graviton. The graviton has yet to be found, so it is not included in the table above.