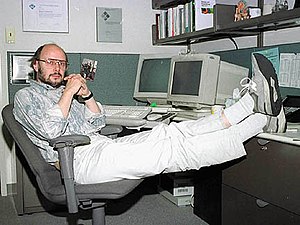 Bjarne Stroustrup, the creator of C++

The following text is C++ source code and it will write the words "Hello World!" on the screen when it has been compiled and is executed. This program is typically the first program a programmer would write while learning about programming languages.

This program is similar to the last, except it will add 3 + 2 and print the answer instead of "Hello World!".

This program subtracts, multiplies, divides and then prints the answer on the screen.