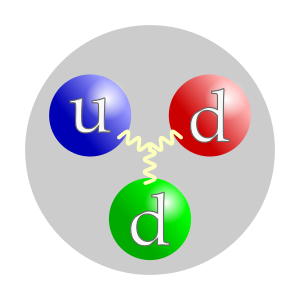 The wavy lines connecting the up quark (u) and down quarks (d) are gluons.
Gluons are what hold quarks together to make bigger particles.[1] Gluons carry the strong force between other quarks, so it is considered a force carrying particle. Photons do the same thing, but for the electromagnetic force. Also, like photons, gluons are spin-1 particles, and when a particle has spin-1 it is considered a boson.

Gluons are hard to study because although they exist in nature all the time, they are so small and require so much energy to break them away from quarks (about 2 trillion degrees) that scientists have only been able to find more about them from particle colliders such as the Large Hadron Collider at CERN.