Many everyday mechanisms that utilize friction include car brakes. Even a person sliding across the floor uses a form of friction.

Some facts about friction are: 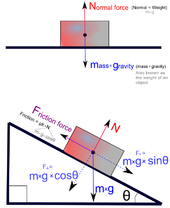