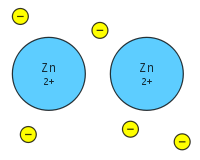 Metallic bond is the reaction between molecules within metals called alkali reactive force. It is the sharing of a sea of delocalised electrons amongst a lattice of positive ions, where the electrons act as a "glue" giving the substance a definite structure.

The electrons and the positive ions in the metal have a strong attractive force between them. Therefore metals often have high melting or boiling points. The principle is similar to that of ionic bonds.

The metallic bond accounts for many physical characteristics of metals, such as strength, malleability, ductility, luster, conduction of heat and electricity.

Because the electrons move independently of the positive ions in a sea of negative charge, the metal gains some electrical conductivity. It allows the energy to pass quickly through the electrons generating a current. Heat conduction works on the same principle - the free electrons can transfer the energy at a faster rate than other substances such as those which are covalently bonded, as these have their electrons fixed into position. There also are few non-metals which conduct electricity: graphite (because, like metals, they have free electrons), and molten and aqueous ionic compounds which have free moving ions. [1] [2] [3]

Metal bonds have at least one valence electron which they do not share with neighboring atoms, and they do not lose electrons to form ions. Instead the outer energy levels (atomic orbitals) of the metal atoms overlap. They are similar to covalent bonds.[4] Not all metals exhibit metallic bonding. For example, the mercurous ion (Hg2+
2
) forms covalent metal-metal bonds.

An alloy is a solution of metals, often used to make metal rope, metal plates, etc.