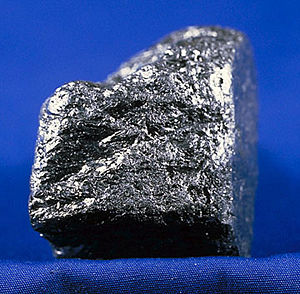 Graphite, like diamond, is an allotrope of carbon. They are very similar to each other but the different structures of the molecule affect the chemical and physical properties. Graphite is made of layers of carbon atoms. These layers can slide over each other very easily. This means that it is very soft. It is a dull gray in appearance. Due to the delocalized electrons between the layers, it can conduct electricity very well.

Most graphite comes from mines in northeastern China. It is also found in Sri Lanka, Canada and the United States. It is also called Lead Black because it looks like the metal lead. It was named by Abraham Gottlob Werner in 1789 originating from the Greek language.

It can be used as a lubricant to make mechanical devices run smoother. The most common use of graphite is the "lead" in a pencil, which also has clay.

High-purity graphite is used as a neutron moderator in some nuclear reactors, such as RBMKs and AGRs.