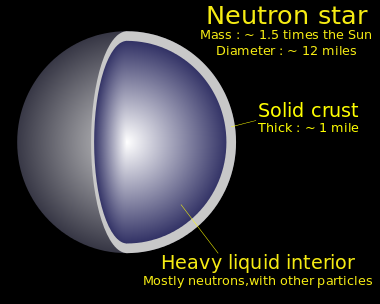 A model that shows what a neutron star would look like on the inside.

A neutron star is a very small and dense star made almost completely of neutrons. It is a very large nucleus held together by gravity.

Neutron stars have a radius of about 10 kilometres (6 mi) and a mass from about 1.4 to 5 times the mass of the Sun.

They are usually what is left of very big stars that have exploded (these are called supernovas). Some are what happen to a white dwarf (small star) that has a lot of energy.

They come in different types. One kind is the pulsar which spins and sends a beam of radio waves (like a lighthouse in space). When this beam moves past Earth, it shows up as a pulse (like the light from a lighthouse is seen as a flash on the horizon). This 'pulse' is why they are called pulsars.

Starting as a supernova

In a supernova, a star runs out of nuclear fuel and explodes.

All other stars that go supernova become neutron stars.

Starting as a white dwarf

A white dwarf whose mass is nearly 1.4 times the mass of the Sun will sometimes get bigger (but no one knows why). When this happens, it will collapse into a neutron star.

Neutron stars have the same properties:

Neutron stars rotate much faster than other stars.

Neutron stars are very dense. They are much denser than anything we find naturally on the Earth.

In a neutron star the electrons have joined with the protons in the nucleus to make neutrons. All the neutrons are joined together by gravity, with not much space in between them.

Another way to understand the density is this: one teaspoon of matter from the neutron star would weigh 6 billion tons.