When placed in a magnetic field, magnetic dipoles are in one line with their axes to be parallel with the field lines, as can be seen when iron filings are in the presence of a magnet. Magnetic fields also have their own energy and momentum, with an energy density proportional to the square of the field intensity. The magnetic field is measured in the units of teslas (SI units) or gauss (cgs units).

The law of electromagnetism was founded by Michael Faraday. 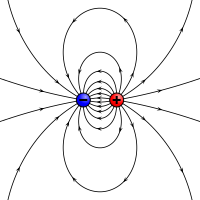 In the magnetic pole model, the elementary magnetic dipole m is formed by two opposite magnetic poles of pole strength qm separated by a very small distance d, such that m = qm d.

The H-field is defined as:

With this definition, Ampere's law becomes:

where If represents the 'free current' enclosed by the loop so that the line integral of H does not depend at all on the bound currents.[1] For the differential equivalent of this equation see Maxwell's equations. Ampere's law leads to the boundary condition:

where Kf is the surface free current density.[2]

Similarly, a surface integral of H over any closed surface is independent of the free currents and picks out the 'magnetic charges' within that closed surface:

which does not depend on the free currents.

The H-field, therefore, can be separated into two[3] independent parts:

The magnetic H-field, therefore, re-factors the bound current in terms of 'magnetic charges'. The H field lines loop only around 'free current' and, unlike the magnetic B field, begins and ends at near magnetic poles as well.