Ampère's circuital law, discovered by André-Marie Ampère in 1826,[1] relates the magnetic field around a closed loop to the electric current passing through the loop. It is now one of Maxwell's equations, which form the basis of classical electromagnetism. 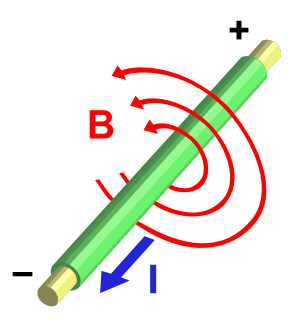 Ampère's circuital law is now known to be a correct law of physics in a magnetostatic situation: The system is static except possibly for continuous steady currents within closed loops. In all other cases the law is incorrect unless Maxwell's correction is included (see below).

In SI units (the version in cgs units is in a later section), the "integral form" of the original Ampère's circuital law is:[2][3]

See below for further explanation of the curve C and surface S. There are a number of ambiguities in the above definitions that require clarification and a choice of convention.

First, three of these terms are associated with sign ambiguities: the line integral [math]\textstyle \oint_C [/math] could go around the loop in either direction (clockwise or counterclockwise); the vector area dS could point in either of the two directions normal to the surface; and Ienc is the net current passing through the surface S, meaning the current passing through in one direction, minus the current in the other direction—but either direction could be chosen as positive. These ambiguities are resolved by the right-hand rule: With the palm of the right-hand toward the area of integration, and the index-finger pointing along the direction of line-integration, the outstretched thumb points in the direction that must be chosen for the vector area dS. Also the current passing in the same direction as dS must be counted as positive. The right hand grip rule can also be used to determine the signs.

Second, there are infinitely many possible surfaces S that have the curve C as their border. (Imagine a soap film on a wire loop, which can be deformed by moving the wire). Which of those surfaces is to be chosen? If the loop does not lie in a single plane, for example, there is no one obvious choice. The answer is that it does not matter; it can be proven that any surface with boundary C can be chosen.

By the Kelvin–Stokes theorem, this equation can also be written in a "differential form". Again, this equation only applies in the case where the electric field is constant in time; see below for the more general form. In SI units, the equation states:

The electric current that arises in the simplest textbook situations would be classified as "free current." For example, the law can apply to the current that passes through a wire or battery. In contrast, "bound current" arises in the context of bulk materials that can be magnetized and/or polarized. (All materials can to some extent.)

When a material is magnetized (for example, by placing it in an external magnetic field), the electrons remain bound to their respective atoms, but behave as if they were orbiting the nucleus in a particular direction, creating a microscopic current. When the currents from all these atoms are put together, they create the same effect as a macroscopic current, circulating perpetually around the magnetized object. This magnetization current JM is one contribution to "bound current".

The total current density J due to free and bound charges is then:

with Jf the "free" or "conduction" current density.

All current is fundamentally the same, microscopically. There are often practical reasons for wanting to treat bound current differently from free current. For example, the bound current usually originates over atomic dimensions, and one may wish to take advantage of a simpler theory intended for larger dimensions. The result is that the more microscopic Ampère's law, expressed in terms of B and the microscopic current (which includes free, magnetization and polarization currents), is sometimes put into the equivalent form below in terms of H and the free current only. For a detailed definition of free current and bound current, and the proof that the two formulations are equivalent, see the "proof" section below.

Shortcomings of the original formulation of Ampère's circuital law

Two issues regarding Ampère's law are important. First, there is an issue regarding the continuity equation for electrical charge. There is a theorem in vector calculus that states the divergence of a curl must always be zero. Hence

and so the original Ampère's law implies that

Second, there is an issue regarding the propagation of electromagnetic waves. For example, in free space, where

To treat these situations, the contribution of displacement current must be added to the current term in Ampère's law.

James Clerk Maxwell conceived of displacement current as a polarization current in the dielectric vortex sea, which he used to model the magnetic field with water (hydrodynamically) and with mechanical systems (mechanically).[9] He added this displacement current to Ampère's circuital law at equation (112) in his 1861 paper On Physical Lines of Force .[10]

In free space, the displacement current is related to the time rate of change of electric field.

In a dielectric the above contribution to displacement current is also present, but a major contribution to the displacement current is related to the polarization of the individual molecules of the dielectric material. Even though charges cannot flow freely in a dielectric, the charges in molecules can move a little under the influence of an electric field. The positive and negative charges in molecules separate under the applied field, causing an increase in the state of polarization, expressed as the polarization density P. A changing state of polarization is equivalent to a current.

where the electric displacement field is defined as:

where ε0 is the electric constant, εr the relative static permittivity, and P is the polarization density. Substituting this form for D in the expression for displacement current, it has two components:

The first term on the right hand side is present everywhere, even in a vacuum. It doesn't involve any actual movement of charge, but it nevertheless has an associated magnetic field, as if it were an actual current. Some authors apply the name displacement current to only this contribution.[11]

The second term on the right hand side is the displacement current as originally conceived by Maxwell, associated with the polarization of the individual molecules of the dielectric material.

Maxwell's original explanation for displacement current focused upon the situation that occurs in dielectric media. In the modern post-aether era, the concept has been extended to apply to situations with no material media present, for example, to the vacuum between the plates of a charging vacuum capacitor. The displacement current is justified today because it serves several requirements of an electromagnetic theory: correct prediction of magnetic fields in regions where no free current flows; prediction of wave propagation of electromagnetic fields; and conservation of electric charge in cases where charge density is time-varying. For greater discussion see Displacement current.

Ampère's equation was extended by including the polarization current, thereby remedying the limited applicability of the original Ampère's circuital law.

Treating free charges separately from bound charges, Ampère's equation including Maxwell's correction in terms of the H-field is (the H-field is used because it includes the magnetization currents, so JM does not appear explicitly, see H-field and also Note):[12]

On the other hand, treating all charges on the same footing (disregarding whether they are bound or free charges), the generalized Ampère's equation (also called the Maxwell–Ampère equation) is (see the "proof" section below):

in integral form. In differential form,

where current density JD is the displacement current, and J is the current density contribution actually due to movement of charges, both free and bound. Because ∇ · D = ρ, the charge continuity issue with Ampère's original formulation is no longer a problem.[14] Because of the term in ε0∂E / ∂t, wave propagation in free space now is possible.

In cgs units, the integral form of the equation, including Maxwell's correction, reads

where c is the speed of light.

The differential form of the equation (again, including Maxwell's correction) is