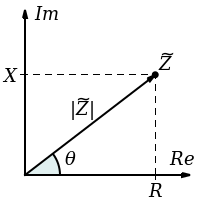 A graphical representation of the complex impedance plane 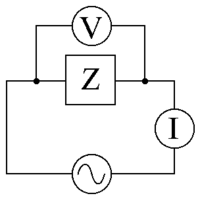 Electrical impedance is the amount of opposition that a circuit presents to current or voltage change.

The two main ways to write an impedance are: (see the 2nd figure, "complex impedance plane")

The Impedance and the resistance are quite similar:

The key difference between resistance and impedance is the word "change", the rate of change affects the impedance. Usually the "change" is expressed as a frequency, the number of times per second the current or voltage change direction. The formulas are:

Where Z is the symbol for impedance, j is the imaginary number [math]\sqrt{-1}[/math], [math]\pi[/math] is the constant pi, f is the frequency, L is the inductance and C is the capacitance. The units for the resistance and the impedance are the same, the ohm with the symbol [math]\Omega[/math] (capital omega).

At the physical level, simplifying many things:

One important difference between the resistance and the impedance is that a resistor dissipates energy, it gets hot, but an inductor and a capacitor store the energy and can return that energy to the source when it goes down.

A signal is partially reflected back where the impedance changes.

If the impedance of the source, cable and load are not all equal, then a fraction of the signal is reflected back to the source, wasting power and creating interference. The ratio of the reflection can be calculated with:

Any medium that can have a wave has a wave impedance, even empty space (light is an electro-magnetic wave and it can travel in space) has an impedance of about 377[math]\Omega[/math]. 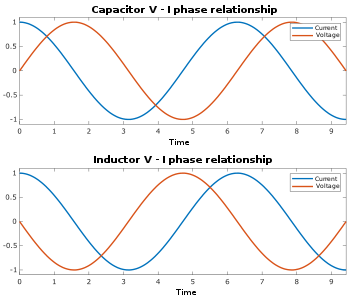 Across a capacitor (top), the voltage (red) changes after the current (blue), across an inductor (bottom) it's before. The difference of phase between the voltage and the current is 1/4 wavelength.

Across a resistor, both the voltage and the current goes up and down at the same time, they are said to be in phase, but with an impedance it's different, the voltage is shifted by 1/4 wavelength behind the current in a capacitor, and forward in an inductor.

A 1/4 wavelength is usually represented with the imaginary number "j", which is also equivalent to a 90 degree shift.

The use of the imaginary number "j" makes the mathematics much simpler, it allows to calculate the total impedance the same way as it's done with resistors, for example a resistor plus an impedance in series is R+Z, and in parallel it's (R*Z)/(R+Z).