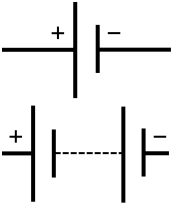 Schematic symbol of a battery
This article is about electrical batteries. For the crime of battery, see battery (tort).

A battery converts chemical energy into electrical energy by a chemical reaction. Usually the chemicals are kept inside the battery. It is used in a circuit to power other components. A battery produces direct current (DC) electricity (electricity that flows in one direction, and does not switch back and forth).

Using the electricity from an outlet in a building is cheaper and more efficient, but a battery can provide electricity in areas that do not have electric power distribution. It is also useful for things that move, such as electric vehicles and mobile phones.

Batteries may be primary or secondary. The primary is thrown away when it can no longer provide electricity. The secondary can be recharged and reused.

The chemistry inside a battery

A Battery can be one cell or many cells. Each cell has an anode, cathode and electrolyte. The electrolyte is the main material inside the battery. It is often a type of acid, and can be dangerous to touch. The anode reacts with the electrolyte to produce electrons (this is the negative or - end). The cathode reacts with the electrolyte and takes electrons (this is the positive or + end).[1] An electric current happens when a wire connects the anode to the cathode, and the electrons move from one end to the other. (But a battery can be damaged by just a wire connecting the two ends, so a load is also needed between the two ends. The load is something that slows the electrons down, and usually does something useful, like a lightbulb in a flashlight, or the electronics in a calculator).[2] 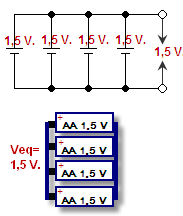 Batteries connected in parallel - shown in a schematic and a drawing

The electrolyte can be liquid or solid. A battery is called a wet cell or dry cell battery, depending on the type of electrolyte.

The chemical reactions that occur in a battery are exothermic reactions. This type of reaction makes heat. For example, if you leave your laptop on for a long time, and then touch the battery, it will be warm or hot.

The cells can be connected to make a bigger battery. Connecting the positive of one cell to the negative of the next cell is called connecting them in series. The voltage of each battery are added together. Two six volt batteries connected in series will make 12 volts.[3]

Connecting the positive of one cell to the positive of the other, and the negative to the negative is called connecting them in parallel. The voltage stays the same, but the current is added together. Voltage is the pressure pushing the electrons through the wires, it is measured in volts. Current is how many electrons can go at once, it is measured in amps. The combination of current and voltage is the power (watts = volts x amps) of the battery.

Batteries come in many different shapes, sizes and voltages.

AA, AAA, C, and D cells, including alkaline batteries, are of standard sizes and shapes, and have about 1.5 volts. The voltage of a cell depends on the chemicals used. The electric charge it can supply depends on how large the cell is, as well as what chemicals. The charge a battery delivers is usually measured in ampere-hours. Since the voltage stays the same, more charge means a bigger cell can supply more amps, or run for a longer time.

The first battery was invented in 1800 by Alessandro Volta. Nowadays, his battery is called the voltaic pile. [4]

In small, modern batteries, the fluid is immobilized in a kind of paste and everything is put in a sealed case. Because of this case, nothing can spill out of the battery. Larger batteries, such as car batteries, still have liquid inside and are not sealed. A kind of battery that uses molten salts as the electrolyte was invented during World War II. 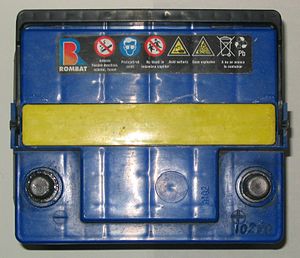 Fuel cells and solar cells are not batteries because they do not store the energy inside them.

A capacitor is not a battery because it does not store the energy in a chemical reaction. A capacitor can store electricity and create electricity much faster than a battery, but it usually costs too much to make it as big as a battery can be. Scientists and chemical engineers are working to make better capacitors and batteries for electric cars.