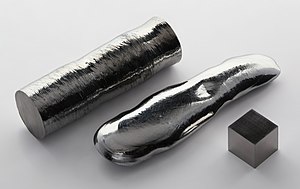 Rhenium is a chemical element. It has the chemical symbol Re. It has the atomic number 75. It is a rare metal. It is silver white. In chemistry it is placed in a group of metal elements named the transition metals. The chemistry of rhenium is similar to manganese. It was the last natural element to be discovered.

Rhenium made as a by-product of molybdenum refinement.

Rhenium is used in some manganese alloys. Rhenium-molybdenum alloys are superconductors.