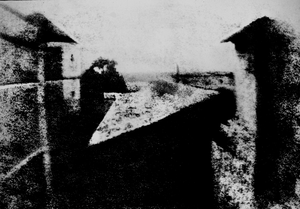 "View from the Window at Le Gras" by Joseph Nicéphore Niépce was taken in 1826, and is the oldest known photograph. 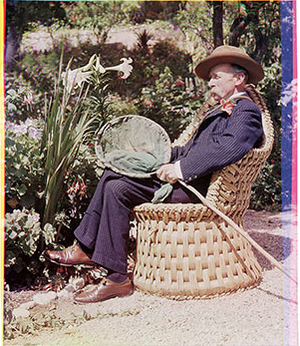 Color photography was done long before color film, as seen in this 1903 portrait by Sarah Angelina Acland. In its early years, the need for special equipment, long exposures, and complex printing processes made it rare.
Main page: Camera

A "camera" is, in its simplest form, like a box with a hole in front of it. There is a special piece of glass in front of the hole called a lens. To take a photograph of something, the lens makes a small picture of the object inside the box. The lens does this by focusing light. A lens in a camera works like a lens in glasses (spectacles) or a magnifying glass. One type of camera called the Pinhole camera has no lens but uses a very small hole to focus light.

Some cameras have an aperture ring. It controls how much light enters the camera box.

The photograph in a camera may be made on film or, if it is a digital camera, using an electronic sensor.File:Basics of photography – how you learn to shoot better photos.webm 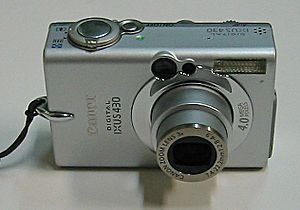 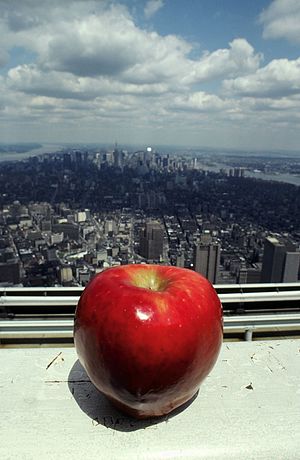 Manhattan, New York City seen from the top of the now defunct World Trade Center with an apple in the foreground, an allusion to the city's nickname, Big Apple.

Another difference between films is how sensitive they are to light. Films have a code number, called an ISO number. The number tells how fast a film reacts when light shines on it.

A photographic print is a photograph made on paper. A light sensitive paper is used. The picture on the film is placed in an enlarger. An enlarger is a machine that shines light through the film and makes a bigger picture on the light sensitive paper. A chemical reaction happens in the paper, which turns the areas hit with light black when the paper is 'developed'. (The more light, the darker the area.) Developing makes the picture appear on the paper – now it is a photograph. Then the paper is put into other chemicals that make it not sensitive to light any more. This is called "fixing". Last, the paper is washed so that there are no more chemicals on it and then dried. Then it is finished.

One of the most important things when taking a photograph is focusing the lens. If the lens is not focused well, the photograph will be blurry. Autofocus cameras focus automatically when the shutter release is pressed. There are also manual focus cameras (usually older ones).

Three other things are important when taking a photograph. These control how bright or dark the photograph will be. The brighter you have it the more transparent the picture comes out, if you have it to bright the whole screen can turn out to be all white, if the camera settings are set to be to dark, well, then the picture will come out to dark. So it really depends on how you want the picture, some cameras automatically come in with the setting at 50%, this is most recommended if you want to take a normal picture, but if you want to adjust the settings, it is recommended to keep it between 45% and 75%.

A slower shutter speed, a bigger aperture, and faster film/higher ISO sensor all make a brighter picture. A faster shutter speed, a smaller aperture, and a slower film/lower ISO sensor all make a darker picture. A good picture is not too bright and not too dark. When it is too bright it would be called "overexposed". An automatic camera changes these things by itself when the shutter release is pressed.

Though there are many types of cameras, all include five indispensable components: