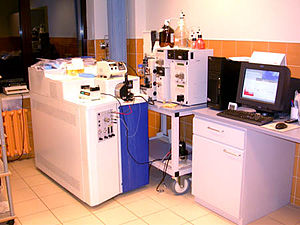 Mass spectrometry (MS) is a process that measures the mass-to-charge ratio of charged particles.[1] It is used to find out the mass of particles, and to find the basic chemical elements in a sample or molecule. It can also make clear the chemical structures of molecules, such as peptides and other chemical compounds. It works by ionizing chemical compounds to make electrically charged molecules or molecule pieces and measuring their mass-to-charge ratios.[1]

The first mass spectroscope was invented by the British physicist J. J. Thomson in 1912. His student Francis Aston developed the mass spectroscope for practical use.[2] They are now widely used for agriculture, brewing, food processing, geology, petroleum exploration, medical drugs and space exploration.[2]