Darmstadtium is a chemical element. It has been named ununnilium (Uun) or eka-platinum but is now named darmstadtium. It has the symbol Ds. It has the atomic number 110. It is a transuranium element. 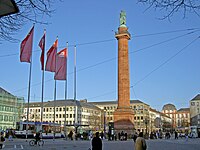 The element is named in honor of German city Darmstadt.

No uses for darmstadtium are known. What darmstadtium looks like is not known because not enough has been made to see it with human eyesight.

Darmstadtium was first made on November 9, 1994. It was made at the Gesellschaft für Schwerionenforschung (GSI) in Darmstadt, Germany. Only a few atoms of it were made. It was made by bombarding a lead target with nickel. A nuclear fusion reaction happened and made the element.[7]

The element was named for Darmstadt which was the place of its discovery. The GSI is in Wixhausen, a part of the north of the city of Darmstadt. The new name (darmstadtium) was given to the chemical element by the IUPAC in August 2003.[8]