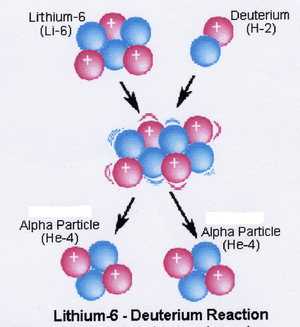 On how Lithium reacts with Deuterium.

A nuclear reaction is a process involving an atomic nucleus or more than one nucleus. The most common kinds are

In the case of radioactivity the reaction is . Fission and fusion can be done on purpose, to release energy. This energy can then be used for different things, for example to make steam (as in a nuclear power plant). It can also be used as energy for a bomb.

In the example figure 6Li fuses with deuterium. This makes Beryllium which then decays into two alpha particles.

Nuclear reactions differ from chemical reactions in that they do not need a catalyst. Radioactive decay also cannot be stopped, sped up or slowed down.