Minecraft is an open world sandbox video game originally made by Markus "Notch" Persson. It was run by a company called Mojang before being sold to Microsoft in 2014 for USD $2.5 billion.[18] It is the best-selling video game of all time, and over 200 million copies of the game have been sold.[19]

In Minecraft, players explore a blocky world filled with various 3D items. Many of these items are cubes, called "blocks". These include basic terrain and resources such as dirt, stone, wood, and sand. There are also items the player can use, such as crafting tables, furnaces, blast furnaces, looms, stonecutters and other interactable blocks. Players can use these to make new items such as tools and armor, as well as different kinds of blocks.[20] Players can then build structures using these blocks, such as buildings, statues, pixel art, and more.

Minecraft has also released on many video game consoles. On May 9, 2012, Minecraft came out on the Xbox 360 as a download through the Xbox Live Arcade. It was available for 1600 Microsoft Points ($19.99). In 2013, Minecraft came out as a disc for the Xbox 360 and PlayStation 3. On December 10, 2013, a Windows Phone version was released.[22] Versions for the Xbox One and PlayStation 4 were released in September 2014.[23] A version for the PlayStation Vita was released on October 14, 2014. The Wii U edition was released on December 17, 2015. In 2017, versions for the Nintendo Switch and the New Nintendo 3DS were released. The Xbox One, PlayStation 4, and Nintendo Switch versions were later all combined into Bedrock Edition.

At the start of the game, players are put in a random location in the game world. They can begin breaking blocks to collect resources, such as wood and dirt, which can be used later in the game. Players can use resources to make new tools, such as pickaxes, which let the player gather stone. Different resources require different tools to collect them. For example, diamonds can only be collected with an iron pickaxe, or one of a better quality.

The game world is mostly infinite. As players explore it, the game makes new sections of the world using procedural generation. The game generates different kinds of terrain in biomes. Different biomes have different blocks in them. For example, a taiga biome will have lots of spruce trees and snow, whereas a plains biome will have lots of grass. The player can also find different structures in the world, like mountains and villages. 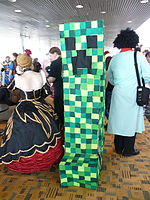 A cosplay of a creeper. Creepers are one of the most well-known mobs in Minecraft.

The game has non-player characters called "mobs" (short for mobile entity). There are many mobs in Minecraft. Some are real-life animals, like cows, pigs, and sheep. Some are based on monsters, such as zombies or skeletons. There are also some which do not exist in the real world in any way, and are unique to Minecraft, such as Creepers, Piglins, and Endermen. Each mob has different things it can do. For example, players can kill cows to get leather, which can make items, and beef, which can be cooked to make food. The Creeper, a hostile mob (meaning it tries to attack the player), will move close to the player and then explode, which usually causes so much damage it will kill the player instantly.

Minecraft has very few goals. Players can choose how they want to play. They can choose to fight bosses, such as the Wither and the Ender Dragon, or choose to explore the world and build. If the player defeats the Ender Dragon, they can see the credits of the game.[24] Minecraft also has lots of achievements called "advancements". These can range from simple things like sleeping in a bed for the first time, to complex things like discovering every biome in the game. Both boss fights and advancements are optional.

In addition to the default dimension the player starts in (called the "Overworld"), there are also two other dimensions in Minecraft - the Nether and the End. Both of these can be accessed with special portals. The player can make Nether portals using obsidian and flint and steel, but End portals have to be found in strongholds. While it is not necessary to go to these dimensions, they have lots of different items and enemies which can not be found in the Overworld. The Ender Dragon can only be fought in the End. After that, the player has a choice of going back to the overworld or to go to the end islands to find an end city and get an Elytra.

Players have a health bar and a hunger bar in this mode. The health bar is shown as 10 hearts and the hunger bar is shown as 10 steaks. Each heart and steak is worth two health points and two hunger points, respectively. The health bar depletes when players get attacked by monsters, lose all of their air underwater, walk into lava or cacti, fall from a high place, fall into the void, or if their hunger bar is depleted completely. Players can heal by staying still, drinking healing potions, and/or if they have a full hunger bar. Players will lose hunger by walking, sprinting and jumping too much. If they are low on hunger, they will not be able to sprint. They can fill their hunger bar by eating food.

During the night, monsters come out to fight the player, but players can build a house to protect themselves from these monsters. If a player sleeps in a bed, they can skip the night, and go directly to the next day. However, they are unable to sleep if there are monsters near the bed.

Players can only carry a certain number of items at any time, by holding them in their inventory. If the player dies, they drop their items, unless they have turned on Keep Inventory. Players can get their items back if they can find them before they disappear. They can then respawn, which sends them back to their spawn point, or the place they started the game at. Players can change their spawn point using items like beds. For example, a player can put a bed in their house to respawn there, and in the Nether players can use a unique block called a respawn anchor to respawn there.

Players can play Survival Mode in four levels of difficulty: Peaceful, Easy, Normal and Hard. As the difficulty increases, the more damage monsters deal. In addition, certain mobs will gain certain abilities at higher difficulty levels. When a player creates a new world, the difficulty is set to normal by default. On peaceful difficulty, no monsters spawn, and the only way players can die is by deaths that aren't from mobs, such as falling from a high place, being in fire or lava, drowning, suffocating inside a block, or falling into the void.

Hardcore mode is like survival mode, but the game is set to the hardest difficulty, which cannot be changed. The player also cannot enable cheats when they create the world and can only do so if they use the "Open to LAN" option in the game menu while they are playing. If a player dies in hardcore mode, they can not respawn, and can only play the world in Spectator Mode. If cheats are enabled, it is possible for the player to play in survival mode again by using commands to change the game mode. This game mode is only available in Java Edition.

Players can also play a special version of hardcore mode known as Ultra Hardcore Mode, which is basically the same as hardcore mode except players do not naturally regenerate health. This mode can be accessed by creating a world in Hardcore mode, enabling cheats using the "Open to LAN" option in the game menu, and using commands to turn off natural health regeneration. The only way the player can regenerate health in this game mode is by using potions, golden apples, suspicious stews, and beacons.

In creative mode, players have infinite items. This is so they can build whatever they want, instead of having to look for resources. They cannot die and do not have a health bar or hunger bar. However, you can kill a person in creative mode with the /kill command in the Java edition of Minecraft. Players can also optionally fly to reach places they normally couldn't.

In spectator mode, players become a "spectator". Spectators can look at the world, but not interact with it, meaning they can't place blocks or use items. They are invisible to other players.

Spectators can fly around the world freely, or they can look at it from the perspective of other players and mobs, meaning they can see what the player or mob sees, as if they were looking through their eyes. This game mode is only available in Java Edition and the Bedrock Developer Edition.

Adventure mode is designed for community maps. The player can not place or break blocks by default.

Education Edition is a version of the game mostly used for schools. Some features of this mode are in Bedrock Edition.

Players can play on the same Minecraft world together by using the multiplayer mode. They can connect to an online server by typing in the server's address (usually an IP address), or by making a game on the local area network (LAN). If the player makes a LAN game, only players on the same network can play. Much like the rest of Minecraft, players can choose what they want to do. For example, they can choose to fight each other, or work together and survive. All game modes can be played in multiplayer.

Minecraft Realms is a special version of the original multiplayer. Realms are multiplayer servers hosted by Mojang. Players can buy them for a small fee. In Minecraft Realms, there are several "mini-games", which are maps/games created by popular Minecraft users.

Minecraft has a very large community, with many fan forums and multiplayer servers such as Hypixel. The Minecraft community is also one of the largest on YouTube. Many people upload various types of Minecraft content to YouTube, such as parody songs, animations, gameplay, and more. Content can also be uploaded to platforms such as Forge.

Minecraft has had many new updates since it first released. These updates are usually announced before they are released. They add lots of new features into the game, such as new blocks, enemies, and items.

Mojang releases smaller development versions called "snapshots" which players can choose to play. These snapshots have a few new features in them, and are released as the developers are working on the new version. This is so players can try out new features before the full version is released.