For the 1960s British psychedelic rock band, see The Zombies.

A group of actors acting as zombies 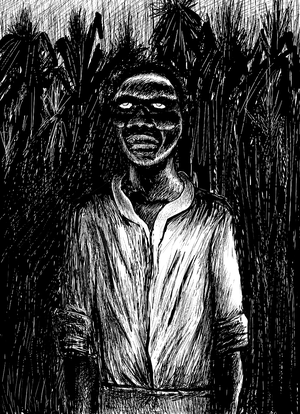 A zombie is a mythical dead person who has returned to life as a walking corpse. Mythical things that have been "re-animated" are called undead, or the living dead. The zombie myth came from the Caribbean.

In Haiti people believe that Voodoo sorcerers or 'bokor' can bring dead people back to life, making a zombie. The zombie is under the control of the sorcerer because zombies have no free will. It's believed a zombie is a trapped human soul. If a sorcerer can catch the trapped soul, the sorcerer becomes more powerful.

Wade Davis wrote about zombies in two books, The Serpent and the Rainbow (1985) and Passage of Darkness: The Ethnobiology of the Haitian Zombie (1988). Davis went to Haiti in 1982 and wrote about how a living person can be turned into a zombie by two special powders being rubbed into a wound. The first powder brings a 'deathlike' state because of a certain poison in it, called tetrodotoxin (the same deadly poison found in the Japanese blowfish). At just the right amount, it can make a person almost die, but not quite. The second powder puts the person in a zombie-like state where they seem to have no free will of their own.

Many people outside Haiti do not believe what Davis wrote about, but in Haiti, lots of people believe in the "zombie drugs".

In Mesopotamian mythology, Ishtar, the goddess of love and fertility once said in anger:

In the Middle Ages, many people believed that the souls of the dead could come back as ghosts and haunt the living, often because of a crime that the living person had committed. Sometimes, the ghost could actually take on a physical shape and touch or attack things or people they can be very dangerous

Zombies can walk, think (in some cases), and attack living persons. Most zombies eat the brains of living humans. In zombies, the heart, lungs, and a small part of their brain still work. They may react to their environment, but they do not have consciousness. Zombies can use their skeleton and muscles to move. The skin is rotten. Its hair and nails are falling off. Zombies are usually covered in blood. They often have open wounds and are dressed in ripped clothes.

Zombies appear a lot in horror and fantasy films. Normally, the zombie is a mindless, clumsy corpse which eats human flesh. Zombies can not be called cannibals because they do not eat each other, only living humans. The first zombie stories appeared in the 1600s. Since that time, zombies have appeared in lots of books and films. They have become more popular in modern media, such as Capcom's Resident Evil series and AMC's The Walking Dead.