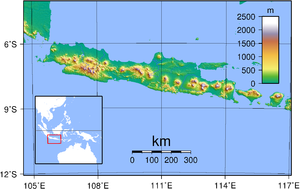 Java (Indonesian: JawaScript error: No such module "Category handler".) is one of the islands of Indonesia.

The area is 132,000 square km. It is the world's 13th largest island. Around 140 million people live there, which is half the people in Indonesia and more than on any other island in the world. Most of them speak the Javanese language and many also speak other languages.

The Java Sea is to the north, the Indian Ocean south. The capital city of Indonesia, Jakarta, is in Java.

Most of Java has a tropical monsoon climate (Am in the Koeppen climate classification). The northern coast of the island is low-lying. The soil is fertile, because the island was made by volcanoes. It is an important area for growing crops in Indonesia.