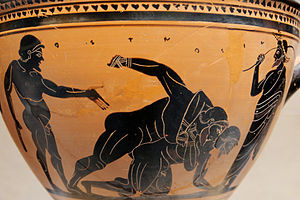 Pankration was a sport in Ancient Greece. Eight of Pindar's odes were written in honor of pankratiasts. The pankration was a form of wrestling with one difference: the athletes were allowed to use their fists. They did not wear boxing thongs however. Kicking and hitting were allowed but biting and gouging an eye or soft spot with a thumb or finger were forbidden. Umpires flogged athletes who violated these rules. In spite of this punishment, violations often occurred.

A Greek wrestler aimed to throw his opponent; a pankratiast however aimed to force his opponent to concede defeat. This might be done by getting an opponent in a hold that, if he did not yield (give up), a bone would be broken or a joint dislocated. Size and weight did not matter as much in the pankration as they did in boxing and wrestling because pankratiasts spent most of their time rolling around on the ground.

The Greeks loved the pankration. They considered it the greatest test of an athlete's skill and strength. The pankration was also a favorite sport in Roman imperial times. The most famous ancient pankratiast was Arrichon of Philageia in the 6th century BC. He won the pankration in two Olympics, but died of a stranglehold in the Olympics of 564 BC. He was awarded the victor's wreath. Both Philostratus and Pausanias told the story of his final bout. A statue in the Olympia Museum may be his.