Women were not allowed to participate or even to see the competitions. 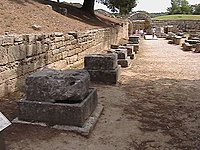 Here are athletes that competed at the Games: