The 2002 Winter Olympics, officially known as the XIX Olympic Winter Games, were held in Salt Lake City, Utah, United States from February 8 2002 to February 24 2002. There were about 2,400 athletes from 77 nations. They were in 78 events. Utah was the fifth state in the United States to host the Olympic Games. 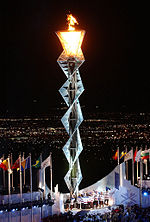 Olympic flame at Rice-Eccles Olympic Stadium during the opening ceremonies