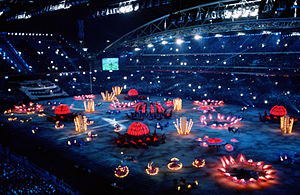 The 2000 Summer Olympics Opening Ceremony at Stadium Australia, on 15 September 2000.

The 2000 Summer Olympics, officially known as the Games of the XXVII Olympiad, took place in Sydney, New South Wales, Australia from September 15, 2000 until October 1, 2000.

A map showing the countries that competed in the 2000 Olympics.

199 National Olympic Committees (NOCs) were in the Sydney Games. Four were in the Olympics for the first time. These were Timor-Leste, Eritrea, Micronesia and Palau.

Marion Jones, winner of three gold and two bronze medals for the United States, gave back her medals in October 2007. She said she took tetrahydrogestrinone (THG), a drug that could make her run faster, from September 2000 through July 2001.[3]

On 2 August 2008, the International Olympic Committee took the gold medal from the U.S. men's 4x400-meter relay team. Antonio Pettigrew said he used a banned substance.[4] Besides Pettigrew other athletes used performance-enhancing drugs. These are twins Alvin and Calvin Harrison, and Jerome Young.[4][5]

On 28 April 2010, the IOC took China's bronze medal from Gymnastics. This was for using an underage gymnast. 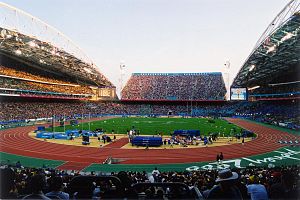 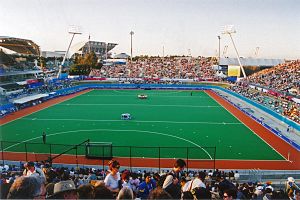 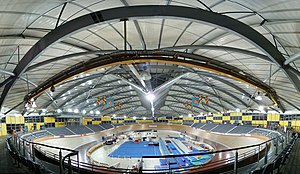