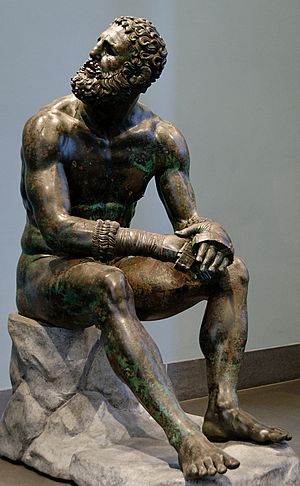 Small statue of a boxer, from the 3rd or 2nd century BC
Ancient Greek boxing is a very old kind of sport. It has been practiced at least since the eighth century BC. Homer wrote about it in his poem Iliad. At that time, Greece was made of many city-states that were independent. Each city state seems to have had its own version of the sport.

Today, most of the sources that talk about Greek boxing are either legends, or they are fragmentary. When a source is fragmentary, this means that part of the text has been lost, or is missing. This makes it difficult to find the rules, or where and how the activity was done. Several details are missing, but it seems boxing with gloves was an important part of the Greek athletic culture of the time.

Where it came from

Minoan youths boxing (1500 BC), Knossos fresco. Earliest evidence for use of gloves.

The activity was called pyx or pygme in Ancient Greek. Archeologists have found evidence that this activity was probably done by the Minoan and Mycenaean cultures. Many legends tell about the origins of boxing in Greece. One legend says that the heroic ruler Theseus invented a type of boxing where two men sat face to face and beat each other with their fists until one of them was killed. Later, the boxers began to fight while standing. They also started to wear gloves (with spikes) and wrappings on their arms below the elbows. In Ancient Greece, most sports were done naked, boxing too.

According to Iliad, Mycenaean warriors included boxing in their competitions. They did this to honor those who had died. It is possible that Homer told about what the Greeks did, at a later time. Boxing was one of the contests held in memory of Achilles' friend Patroclus, who was killed toward the end of the Trojan War. To commemorate Patroclus the Greeks later introduced boxing (pygme / pygmachia) to the Olympic Games in 688 BC. People taking part trained on punching bags (called a korykos). Fighters wore leather straps (called himantes) over their hands, wrists, and sometimes chest, to protect themselves from injury. The straps also left the fingers free.

Philostratus was a scholar and an historian. According to him, boxing was originally developed in Sparta, in order to harden warriors’ faces for battle. The early Spartans believed helmets were unnecessary and boxing prepared them for when they were hit on the head in battle.[1] However, Spartans never took part in the competitive version of boxing. They thought it was dishonorable to be defeated that way. [2] 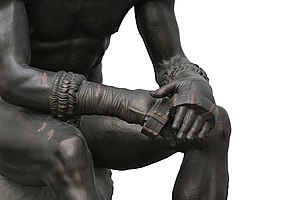 Until around 500 BC himantes were used as protection for the knuckles and hand. They were thongs of ox hide between 3 and 3.7 meters long. The himantes were wrapped around the hands and knuckles many times.

Around 400 BC sphairai were introduced. The sphairai were very similar to himantes. The biggest difference was that the inside was padded when they were wrapped around the hands. The outside of the thong was more rigid too.[1]

Soon after the saphirai had been introduced, they were replaced by oxys used for boxing. Oxys were made of several thick leather bands that were wrapped around the hand, wrist, and forearm. A band of fleece was placed on the forearm to wipe away sweat. Leather braces extended up the forearm to give greater support when punching. The knuckles were reinforced with leather as well.[3]

Korykos were the equivalent to modern punching bags. They were used for practice in the Palaestra and were filled with sand, flour, or millet.

The right boxer signals he is giving up by raising his finger high (ca. 500 BC)

The rules currently used for the sport are based on the old rules. As pointed out above, there are only incomplete sources for the rules. The rules needed to be deduced from old texts and images:[4]