Greek had many different dialects.[1] Attic Greek was spoken in Athens, the largest city, and was thought to be the purest form of Greek. Later, in the educated Roman world, children were taught Greek as a second language just as many people now learn English as their second language. Koine Greek was the common language of Greeks. It was Attic Greek mixed with several other dialects.

Homer spoke and wrote in an old dialect that was somewhat different from Attic Greek. The Iliad and the Odyssey are long poems that tell exciting stories about warfare, travel and the Greek gods. In the 5th century BC, some great plays were written by Aeschylus, Sophocles and Euripides. The Golden Age of Ancient Greece inspired literature that has been read for centuries.

Attic Greek was the dialect that was spoken in Athens and the rest of the region of Attica. It was the dialect most similar to later forms of Greek since it was the standard form of the language. It is studied in Ancient Greek courses because it was the most common dialect.

All languages change with time, and Greek has changed a great deal over 2500 years. Modern Greek is often said to have started in the year 1453 AD.[2]

Unlike Latin, Ancient Greek did not split into many languages, but it is still considered to be a separate language from Modern Greek. The pronunciation has changed; for instance, beta was pronounced "b" in Ancient Greek, but it is pronounced "v" and is called "vita" in Modern Greek. The spelling has not changed much, which gives the appearance of less change than has actually happened. Also, many different vowels and diphthongs merged into "i", the vowel sound in the English word "ski". The tonal system of Ancient Greek has disappeared, but modern Greek had only recently changed its spelling to match that change.

Despite these changes, much of the language has remarkably survived intact through the centuries.[3] There is a community near Trabzon, Turkey, that speaks a dialect that is closer to Ancient Greek than to Standard Modern Greek.[4] 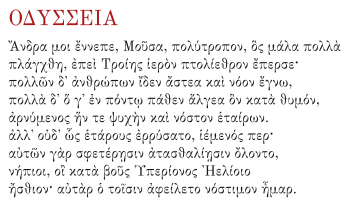