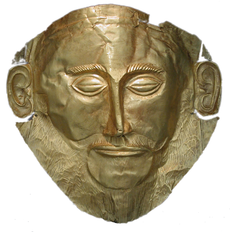 Aeschylus (525 BC – 456 BC) was an Ancient Greek poet and writer. He wrote about 70–90 plays.[1][2] Only six of his tragedies have survived complete. Aeschylus was the earliest of the three greatest Greek writers of tragedians. The two others were Sophocles and Euripides.[1][3]

Aristotle said that Aeschylus added more characters into his plays. His characters spoke to each other and not just to the chorus. This made it easier to create drama between the characters.

One of his plays, The Persians, was about the Persian invasion of Greece. Aeschylus had fought in this war. People studying Greek history use his play as an important source of information. The war was so important to the Greeks and to Aeschylus, that the writing on his grave only talks about his part in the Greek victory at the Battle of Marathon. There is nothing about the plays he wrote.

Aeschylus was born about the year 525 BC in a small town called Eleusis, which is about 27 kilometers northwest of Athens.[4] The date is based on counting back forty years from his first victory in the Great Dionysia. His family was rich, and his father, Euphorion, was a member of the Eupatridae, the ancient nobility of Attica.[5] Pausanias wrote that Aeschylus worked in a vineyard until the god Dionysus visited him in his sleep. The god ordered him to write the first tragedies.[5] His first play was performed in 499 BC, when he was only 26 years old.[4][5]

In 490 BC the Persian army, led by Darius, landed in Greece and tried to take it over. Aeschylus, and his brother Cynegeirus, joined the army from Athens and fought against the Persians at the Battle of Marathon.[4] The Athenians were able to defeat the much bigger Persian army. This battle, which stopped Darius, was celebrated across the city-states of Greece.[4] Cynegeirus died in the battle.[4] In 480 BC, Xerxes I of Persia tried to capture Greece. Aeschylus fought against them at the Battle of Salamis and at the Battle of Plataea in 479 BC.[4] His oldest surviving play The Persians, performed in 472 BC, is set during the Battle of Salamis. This play won first prize at the Dionysia.[6]

Aeschylus was one of many Greeks who joined the Eleusinian Mysteries. This was the religious cult of Demeter, and based in his home town of Eleusis.[7] Members of the group learned mystical and secret knowledge. Members were sworn under the penalty of death not to say anything about the Mysteries to anyone. Aristotle wrote that some people thought that Aeschylus had shown some of the cult's secrets on stage.[8] Other writers said that an angry mob tried to kill Aeschylus on the spot, but he ran away. Later, Aeschylus said he did not know that he had shown any of the secrets. He was saved from death only because of his brave service in the Persian Wars.

Aeschylus made two trips to Sicily in the 470s BC. He was invited by Hieron, tyrant of Syracuse, a big Greek city on the east side of the island. On one of these trips he wrote The Women of Aetna, in honor of the city founded by Hieron. He also restaged his Persians.[4] By 473 BC, Aeschylus was the yearly favorite in the Dionysia, winning first prize in nearly every competition.[4] In 458 BC, he returned to Sicily for the last time, visiting the city of Gela where he died in 456 or 455 BC. It is said that he was killed by a tortoise which fell out of the sky after it was dropped by an eagle. This story is probably only a legend.[9] Aeschylus' work was so respected by the Athenians that after his death, his were the only tragedies allowed to be restaged in future competitions.[4] His sons Euphorion and Euæon, and his nephew Philocles, all wrote plays as well.[4]

Modern picture of the Theatre of Dionysus in Athens, where many of Aeschylus' plays were performed

Aeschylus took part in many of these competitions in his lifetime. Only six tragedies have survived intact: The Persians, Seven against Thebes, The Suppliants, and the trilogy known as The Oresteia, consisting of the three tragedies Agamemnon, The Libation Bearers and The Eumenides. There is also the play Prometheus Bound, but this was probably written by someone else. All of the surviving plays won first prize at the City Dionysia. One book, the Alexandrian Life of Aeschylus, said that he won the first prize at the City Dionysia 13 times. Sophocles' won 18 times out of his 120 plays, and Euripides only had five wins out of about 90 plays.

Influence on Greek drama and culture 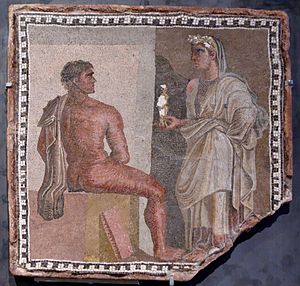 Mosaic of Orestes, main character in Aeschylus' trilogy, The Oresteia

When Aeschylus first began writing, the theatre was new. Some playwrights like Thespis had made the cast bigger to include an actor who was able to talk with the chorus.[2] Aeschylus added a second actor, allowing for more drama; and the chorus became less important.[2] He is said to have been the first to use skenographia, or scene-decoration,[12] though Aristotle said the first person was Sophocles. Aeschylus also added more details to the costumes, and had his actors wear platform boots, called cothurni, to help the audience see them better. When they walked on stage in the first performance of the Eumenides, the chorus of Furies were so frightening in looks that they made young children faint, old men urinate, and pregnant women go into labor.[13]

His plays were written in the strict style of Greek drama. They were in verse and no violence could be performed on stage. The plays had to be set away from normal life in Athens, either by telling stories about the gods or by being set, like The Persians, in a far-away place.[14] Aeschylus' work has a strong moral and religious emphasis.[14] The Oresteia plays were about man's position in the universe in relation to the gods, the laws of the gods, and punishment from the gods.[15]

Fifty years after Aeschylus' death, the comic playwright Aristophanes praised him in The Frogs. Aeschylus is a character in the play and says that his Seven against Thebes "made everyone watching it to love being warlike" (line 1022); with his Persians, he says he "taught the Athenians to desire always to defeat their enemies" (line 1026–7). He says that his plays helped the Athenians to be brave and virtuous (line 1039ff).