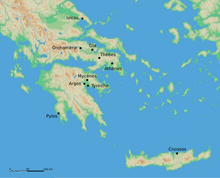 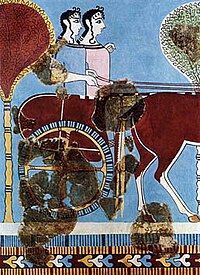 Two Mycenean women out on a chariot... Fresco from Tiryns ~1200BC 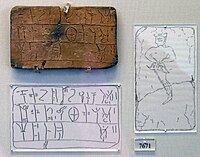 Example of Linear B script

The Mycenaean culture (~1600–1100BC) was an early Greek culture during the Bronze Age, on the Greek mainland and on Crete. 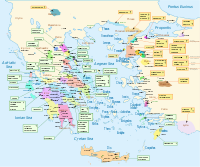 Map of Greece as described in Homer's Iliad. The geographical data is believed to refer primarily to Bronze Age Greece, when Mycenaean Greek would have been spoken.

The name Achaean was used by Homer to describe them, and occurs in the Iliad. The term we use is derived from Mycenae, which is an important archaeological site about 90 km from Athens. Other important Mycenaean sites are at Athens, Thebes, Tiryns and Pylos. The epic poems of Homer, the Iliad and the Odyssey, are Mycenaean in origin.

The earlier Minoans traded but did not conquer. The Mycenaeans traded and conquered.[1]

Mycenaean is the oldest known form of the Greek language. It was spoken on the Greek mainland and on Crete in the Mycenaean period, 16th to 12th centuries BC. The language is written on clay tablets in a script called Linear B. Most of these tablets were found in Knossos in central Crete, and in Pylos in the southwest of the Peloponnese. Other tablets have been found at Mycenae itself, Tiryns and Thebes and at Chania in Western Crete.[2]

For a long time no-one could translate the tablets. At last, in 1952 Michael Ventris deciphered the script. He showed that the language was an early form of Greek.[3][4]

The texts on the tablets are mostly lists and inventories. There are no stories, myths or poetry, but they give us some idea of the people who made them.

By the late thirteenth century BC mainland Greece witnessed a wave of destruction. The Mycenaean sites declined, and the people moved to refuge settlements. This is the so-called Greek Dark Ages; little or no writing is found until the 8th century BC. See Ancient Greece for this and later periods.

Comparison with the Hittite language

The somewhat younger Linear B tablets suggest that the people called Mycenaeans might have been Achaeans. No written source found at a Mycenaean site reveals what they called themselves. In the Iliad, the residents of the Peloponnesus and nearby islands are often called Achaeans. There is mention of the Ahhiyawa in Hittite sources from the Late Bronze Age,[5][6] which suggests itself that the Mycenaeans could possibly be Achaeans.[7] The Tawagalawa Letter,[8] written by an unnamed Hittite king (14th–13th century BC) to the king of Ahhiyawa, treats him as an equal. The letter suggests that Miletus (Millawanda) was under his control and refers to an earlier 'Wilusa' episode" involving hostility by Ahhiyawa. Ahhiya(wa) has been identified with the Achaeans of the Trojan War and the city of Wilusa with the legendary city of Troy. However the exact relationship of the term Ahhiyawa to the Achaeans is hotly debated by scholars, even after the discovery that Mycenaean Linear B is an early form of Greek.[9] The written forms of the two languages are quite different.