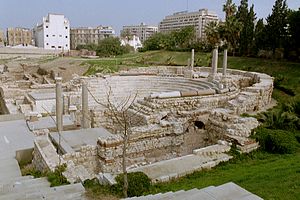 A Roman theatre in Alexandria, Egypt

A 12th century BC (Bronze Age) hoard from Stockheim in Germany

When archaeologists do fieldwork, they look for remains, often by digging in the ground. As settlements (places where people lived in groups) change and grow, old buildings get buried. Usually, this is a natural process. A typical student project is to leave an object in a place where there is nothing going on. It will get covered rather quickly, because wind, water and plants will bury it. Sometimes buildings are deliberately buried to make way for new buildings. Ancient Rome, for example, is now up to 40 feet (12 metres) below the present city. This process of natural or man-made burial is why archaeological fieldwork involves digging, and is expensive and takes a long time.

When things are found, or even when nothing is found, the results of the fieldwork are taken back to a base. Short term, the base is often on or near the site. Longer term, the results will usually go to a university or museum. Everything is written down on paper or entered into a computer. Gradually, they build up a picture of what happened long ago. Archaeologists publish their research so others can understand what they learned.

Archaeologists do not all study the same topics. They have specialties. Some fields of interest include Ancient Egypt (these specialists are called Egyptologists), Ancient China, or the Vikings. Archaeologists study every civilization that is known, especially the ones where there is no written history. They can study any time period. For example, one might study the beginning of human life in Africa, or study World War II. Marine archaeologists study things that are now underwater. They search for sunken ships or cities that have been lost under the sea.

There are many different ways of doing archaeology. these depend on the methods used, the things studied, and the environment. Some of these subdisciplines overlap with each other.

Archaeology relating to oceans, seas and lakes is usually done underwater. It includes the study of sunken ships and submerged coastlines. "Maritime archaeology" is a part of this subdivision. It refers to the archaeological investigation of past ships and seafaring.[2] A famous example of maritime archaeology is the recovery and restoration of the ship burial at Sutton Hoo.

When a glacier melts, objects that were captured in it are revealed. The recovery and study of these objects is called "ice-patch archaeology".[3] A famous example is Ötzi the Iceman.

Historical archaeology deals with places, things, and issues from the past or present at or related to sites with written records or oral traditions. Or it can be defined as "the archaeological investigation of any past culture that has developed a literate tradition."[4] A prominent example of historical archaeology is the work done at Colonial Williamsburg.

This relatively new branch of archaeology consists of "the systematic study of structures and artefacts as a means of enlarging our understanding of the industrial past."[5]

Archaeozoology, or zooarchaeology, is the study of the relationships between humans and animals in the archaeological record. This includes the study of bones, feathers, teeth and other body parts as well as their interpretation.[6]

This field involves attempts at replicating the actions and conditions of ancient cultures. Good examples are Butser Ancient Farm and Overton Down.

In many countries, governments and other groups of people protect important archaeological sites so they will not be destroyed and so that visitors can always come and see them.

Sometimes archaeological sites are found when foundations are dug for new buildings. Archaeologists have to work quickly when this happens, because people who are building often don't have a lot of time. As soon as the archaeologists are done with their work, the remains that they have found will be covered over, unless they are very important.