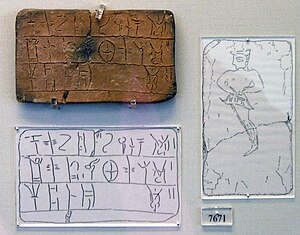 Tablet with writing in Linear B script

Linear B is an ancient script, used to write Mycenaean Greek, as the oldest known form of Ancient Greek. This was proved by Michael Ventris in the early 1950s.[1] Linear B came before the Greek alphabet by several centuries.

The script is based on Linear A, a script which cannot be read today. The oldest texts written in Linear B date from about 1450 BC.[2] Linear B was found mainly in the palace archives at Knossos, Cydonia,[3] Pylos, Thebes and Mycenae.[4] The writing of Linear B language disappeared with the fall of the Mycenaean civilization.

There are about 87 signs in Linear B that represent syllables. In addition, there are many ideographic signs: These represent objects or commodities. They do not represent sounds, and are never used as word signs in writing a sentence.

Linear B seems to have only been used for administration. In all the thousands of clay tablets, a relatively small number of different "hands" (or writers) have been detected: 45 in Pylos (west coast of the Peloponnese, in southern Greece) and 66 in Knossos (Crete).[5] The script may have only been used by a guild of professional scribes. These scribes worked at the different palaces: when the palaces were destroyed, the script disappeared.