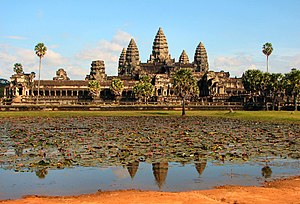 Front side of main complex 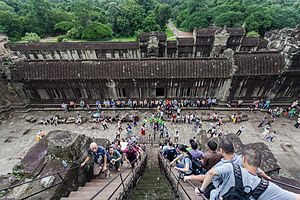 Tourists in the interior courtyard

Lua error in package.lua at line 80: module 'Module:Transcluder' not found. Angkor Wat is a temple complex at Angkor, Cambodia, built for the Hindu king Suryavarman II in the early 12th century as his state temple and capital city. Before long it became a Buddhist site. It is the world's largest religious building. Angkor fell into decline after the 14th Century.[1]