One of the bush fires in New South Wales, Australia, viewed from Wagga Wagga.

Barack Obama and Michelle Obama at the parade after Barack Obama's second public inauguration on January 21.

The meteor over Chelyabinsk

The scene after the first of the explosions in Boston, Massachusetts. 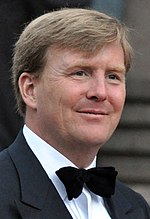 King Willem-Alexander of the Netherlands

View of the devastation caused by the 2013 Moore tornado on May 20.

Flooding in Passau, Bavaria, southern Germany, during the floods in Central Europe.

The scene after the train crash in Lac-Megantic, Quebec, on July 6.

Aftermath of the train crash in Santiago de Compostela on July 24.

The discovery of the Olinguito is announced on August 15.

Tony Abbott becomes the 28th Prime Minister of Australia after winning the election.

Typhoon Haiyan destroyed many towns and cities, and killing thousands of people.

Nelson Mandela, who died at age 95 in Johannesburg

In fiction and popular culture