December (Dec.) is the twelfth and last month of the year in the Gregorian calendar, with 31 days, coming between November (of the same year) and January (of the following year). With the name of the month coming from the Latin decem for "ten", it was the tenth month of the year before January and February were added to the Roman calendar.

December's flower is the Narcissus. Its birthstone is the turquoise. The meaning of the turquoise is prosperity.

Some of the holidays celebrated in December are Christmas, New Year's Eve, Kwanzaa, and Hanukkah.

A Christmas market in Dresden, Germany in December

December is the 12th and last month of every calendar year in the Gregorian calendar, and is one of seven months of the year to have 31 days. December 31 is followed by January 1 of the following year.

Judaism's festival of light, Hanukkah, is also celebrated over eight days in this month.

Sinterklaas is celebrated in the Netherlands and Belgium on December 5.

New Year's Eve fireworks in Sydney, Australia, one of the first major cities to start the new year.

Eleven hours after Sydney, Edinburgh in Scotland welcomes the new year with its famous Hogmanay fireworks 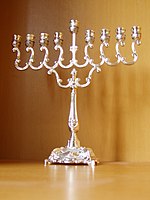 The Menorah used in Hanukkah in Judaism.

Map of Finland, which declared independence on December 6, 1917.

Roald Amundsen and his expedition team at the South Pole on December 14, 1911.

Text for Silent Night, which was first performed on December 24, 1818.

The planet Neptune was observed by Galileo on December 28, 1612.