April is the fourth month of the year, and comes between March and May. It is one of four months to have 30 days.

April's flowers are the Sweet Pea and Daisy. Its birthstone is the diamond. The meaning of the diamond is innocence.

Spring flowers in April in the Northern Hemisphere.

April comes between March and May, making it the fourth month of the year. It also comes first in the year out of the four months that have 30 days, as June, September and November are later in the year.

It is unclear as to where April got its name. A common theory is that it comes from the Latin word "aperire", meaning "to open", referring to flowers opening in spring. Another theory is that the name could come from Aphrodite, the Greek goddess of love. It was originally the second month in the old Roman Calendar, before the start of the new year was put to January 1.

Quite a few festivals are held in this month. In many Southeast Asian cultures, new year is celebrated in this month (including Songkran). In Western Christianity, Easter can be celebrated on a Sunday between March 22 and April 25. In Orthodox Christianity, it can fall between April 4 and May 8. At the end of the month, Central and Northern European cultures celebrate Walpurgis Night on April 30, marking the transition from winter into summer.

Poets use April to mean the end of winter. For example: April showers bring May flowers.

An April Fools' Day hoax for April 1 in Copenhagen.

Songkran celebration in Thailand around April 14. 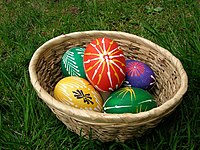 Eggs celebrating Easter, which often falls in April, but sometimes falls in March.

Image traditionally showing it as raining in April in the Northern Hemisphere.

Inauguration celebration for Nunavut on April 1, 1999. 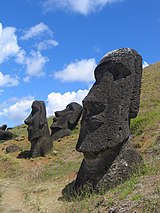 A statue on Easter Island - Jacob Roggeveen became the first European to land there on April 5, 1722. 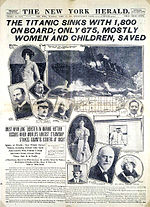 Newspaper report on the sinking of the RMS Titanic on April 15, 1912.

Fires after the San Francisco earthquake on April 18, 1906.

Painting showing the Mutiny on the Bounty on April 28, 1789.

Queen Juliana of the Netherlands, who abdicated the throne on her 71st birthday, April 30, 1980. 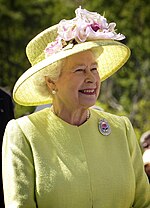 Elizabeth II is one of six current European monarchs to have been born in April.