Sardinia (Italian: Sardegna, Sardinian: Sardigna) is the second largest island in the Mediterranean Sea. It is an autonomous region of Italy. It was formerly the Kingdom of Sardinia.

The official name is, in Italian, Regione Autonoma della Sardegna.The capital and largest city is Cagliari.

The island is on the western Mediterranean Sea, between the island of Corsica to the north and Tunisia to the south. The Tyrrhenian Sea part of the Mediterranean is directly east of Sardinia, between the Sardinian east coast and the west coast of the Italian mainland peninsula.

The mountain chains of the island are separated by wide valleys; the main ones are Campidano in the southwest between Oristano and Cagliari, and the Nurra in the northwest.

There are many small islands around the main island of Sardinia. Some of them are:

Sardinia is divided in eight provinces: 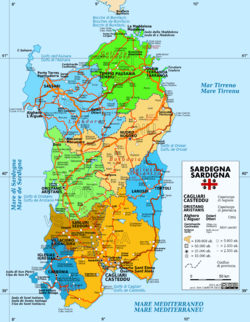