Tunisia,[a] officially the Republic of Tunisia,[b][18] is a country in North Africa. Tunis is its capital.

Since history has been recorded, there were Berber tribes living in what is now Tunisia. Most of them built little towns and ports along the coastline so they could trade with different travellers from everywhere in the Mediterranean Sea. Most of the travellers that used to pass by Tunisia were Phoenicians who started to settle on the Tunisian coast during the 10th Century BC. Later, in the 8th Century BC, Carthage was built by some settlers that came from Phoenicia and regions abroad. After many wars against Greece in 6th Century BC, Carthage dominated the Mediterranean Sea.

During the Second Punic War, Carthage invaded Italy with an army led by Hannibal. The series of wars between the Roman Empire and Carthage ended with the destruction of Carthage in the 2nd Century BC. Its territory in Africa became part of the Africa Province of the Roman Empire.

When the Roman Empire became weak, the Vandals occupied that region. This was in the 5th Century AD, and one hundred years after that, it became under the control of the Byzantine emperor Justinian.

In the 7th Century, it was conquered by the Arab Muslims who built a city which they called Kairouan. This was the first Arab Muslim city in Tunisia. Many Muslim dynasties (monarchies) ruled Tunisia. One of the best known dynasties was the Zirids dynasty. The Zirids were Berber people and followed the rules of the Fatimides, a bigger dynasty in Cairo. When the Zirids angered the Fatimides, the Fatimides sent some tribes known as Banu Hilal who ravaged (destroyed and vandalized) Tunisia.

After a brief occupation of Tunisia by the Normans of Sicily in the 12th Century, the Almohad re-conquered it. After that came the Hafsids. In the last years of their reign, the Hafsids became weak and Spain took control of many cities on the coast until they were finally occupied by the Ottoman Empire.

In 1705, Tunisia became virtually independent during the Hussein dynasty, but still had to follow orders from the Ottoman Empire.

Some controversial financial decisions (money-lending) taken by the Bey in mid-1800s in an attempt to repair the country led Tunisia to become under the control of France. Tunisia became officially a French protectorate in on May 12, 1881, but with the strong opposition of the kingdom of Italy because there was a huge Italian community in Tunisia.[19]

Important parts of the North African Campaign of World War II were fought in Tunisia from 1941 to 1943.

General Erwin Rommel, the German commander in Africa, wished to defeat the Allies in Tunisia, as the Germans had done in the Battle of France when the Allies were inexperienced against the German Blitzkrieg. On February 19, 1943, Rommel launched an attack against the U.S. Forces, with his German and Italian troops, in the western area of Tunisia. That was a disaster for the United States.

After that, the Allies understood the importance of tank warfare. With better supplies than the Germans, they easily broke into the German lines in southern Tunisia on March 20, 1943. In May 11, 1943 the last German troops surrendered, followed two days later by the Italian troops.

Tunisia became independent in 1956 with the former Bey of Tunis as King. Prime Minister Habib Bourguiba became the first president in 1957 when it became a republic. Bourguiba focused on education and economic development. He was supportive of women's rights. However, he had a cult of personality around him and most of the power in the country was held by Bourguiba.

In 1987, Bourguiba was removed from power by Zine el Abidine Ben Ali. Ben Ali ruled as dictator of the country until 2011, when he was overthrown in a revolution. The revolution was the first major revolution of the Arab Spring. Tunisia began becoming more democratic, and in 2014, the country held its first free presidential election. The election was won by Beji Caid Essebsi, a secular, liberal candidate.

The Sahara Desert covers 40% of Tunisia. The other 60% is a fertile area.

Standard Arabic is the official language by the Tunisian constitution. But Tunisians speak Tunisian Arabic. Tunisian Arabic is a mix of many languages of people that live or lived in Tunisia. It is called Darija or Tunsi.

A small number of people living in Tunisia still speak a Berber dialect, known as Shelha.

Most people now living Tunisia are Maghrebin Arab. However, small groups of Berbers and Jews live in Tunisia.

The constitution says that Islam is the official state religion. It also requires the President to be Muslim. 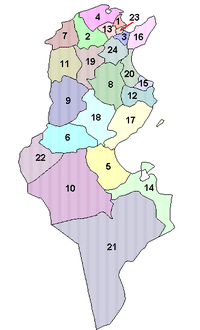 Tunisia is divided into 24 governorates. They are: 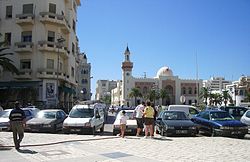 The largest cities in Tunisia are:

Tunisia's economy has many sectors: agriculture (fruit, vegetable oil and vegetables), tourism (when people come from other countries to visit), mining (extracting goods from under the ground), and petroleum (fuel and gas oil). The government used to control the economy, but now it has sold some public companies. This is called privatization.

Tunisia was also the first Mediterranean country to make an agreement with the European Union. This association agreement was signed on March 1, 1995.

Tunisia has plans for two nuclear power stations, to be working by 2019.