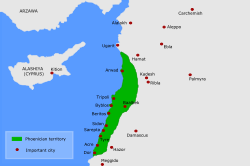 Phoenicia was a civilization to the north of Canaan.[1] Phoenicia existed from 1200 to 900 BC. People from Phoenicia had their own language called the Phoenician language, which is important to many modern languages.[2] They wrote with an alphabet from which the alphabets of Europe evolved.